(Clearwisdom.net) At noon August 23 2010, the Swedish NGO "Upplysning of Kommunismen" hosted their annual rally in downtown Stockholm to commemorate the victims of communism, Nazism and other dictatorships. 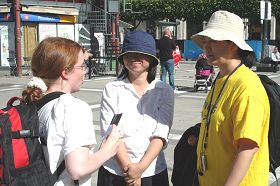 Swedish NGO "Upplysning of Kommunismen" hosted their annual rally in downtown Stockholm to commemorate the victims of communism, Nazism and other dictatorships. In the picture, a Falun Gong practitioner is talking to other attendees.

Many government officials attended the rally and gave speeches including the Swedish Minister of Education, Representative of EU, Vice President of EUC. The speeches condemned the Nazi and communist dictatorships and crimes. The Falun Dafa Association of Sweden was invited to the rally, and practitioners distributed the book Nine Commentaries on the Communist Party in both English and Swedish. They also passed out fliers exposing the persecution of Falun Gong, including the organ harvesting atrocities. 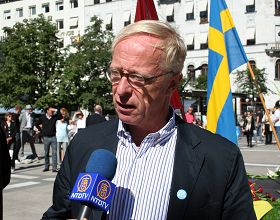 EU Representative Mr. Gunnar Hokmark said, "China's government is a dictatorship, suppressing its own people. China has become an economically large country, but this cannot be an excuse." 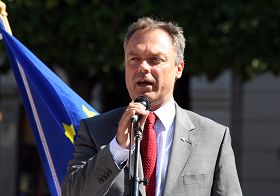 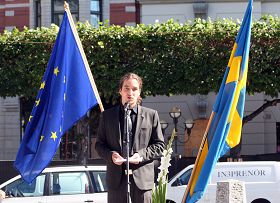 Founder of "Upplysning of Kommunismen" Mr. Anders Hjemdahl organized the rally. In his speech, he said that Chinese people need support just like those of the Baltic countries after the fall of the Soviet Union. "The Chinese people have suffered a long time, and China has such a large population, their freedom is the most important thing in the world."

Mr. Hjemdahl went to United States to accept an award last year and saw a large rally and march held by Falun Gong practitioners. He was very touched so he invited the Falun Dafa Association to this event. "(We) need to let more people be aware of Chinese Communist Party's atrocities," he said, "The Chinese people need freedom."

Laury Weljah is a student from a college in Stockholm and she couldn't understand why the CCP uses such brutal methods to torture the Falun Gong practitioners. She talked to some practitioners for a long time and took a copy of the Nine Commentaries. She became interested in Falun Gong and said she would look into it more deeply online.