(Clearwisdom.net) At a tourist site in Sydney you can often see a lady who is radiant and in great spirits who tirelessly talks to Chinese tourists concerning the truth about the practice and the persecution of Falun Gong in China. She also tells them about the true evil nature of the CCP and kindly offers them the opportunity to quit the Party. This amiable and optimistic-looking lady is 67-year-old Ms. Man. 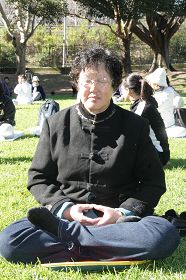 Before she started practicing Falun Gong, Ms. Man used to suffer from heart disease, stiff shoulders, cervical vertebral and lumbar hyperostosis, hyperplasia, and appendicitis. She could not bend over, could not lift heavy objects and could not lie flat or on her side to sleep at night. The pain usually kept her tossing and turning and she ended up with little sleep.

As her health was in terrible shape, her temper became bad too. Later, she decided to look for a remedy in Qigong practices.

In the summer of 1996, she was searching for Qigong books at a book stand near her home. Someone handed her a book called Zhuan Falun. After reading the book, she was very excited, "This is a rare but magnificent masterpiece. It contains all the answers to life." She then read it a second time and said that she enlightened to the reasons for disease and various mishaps in life. She came to understand the meaning and purpose of life. Since then, she has embarked on her path of cultivation in Falun Gong.

Very soon she found a local practice group. The first day she joined the group, her arms felt very heavy and she sweat profusely during the second exercise. However, she managed to finish it. She also encountered difficulty crossing her legs. She practiced crossing her legs wherever and whenever she got a chance. Within a month, all of her diseases disappeared completely. She felt light, walked with ease, and slept soundly. She witnessed the miraculous nature of Dafa. To this day, she has not taken a single pill or injection, nor has she gone to a hospital in the past 14 years.

In her practice, she has conducted herself according to the principles of Truthfulness-Benevolence-Forbearance in her daily life. Her family had a restaurant and business was great. In the past, she scolded her employees whenever someone did not meet her standards. After practicing Falun Gong, she knew she should not do things that cause her to lose virtue. However, sometimes the tables were turned and employees complained about her and did not obey her orders. One day Ms. Man asked an employee to move a table to the outside. The employee replied, "Why can't you do it yourself?" She was about to explode with bad temper, when Teacher's words appeared in her mind, "When problems arise, when something doesn't feel right, you have to look at yourself!" (Teaching and Explaining the Fa at the Metropolitan New York Fa Conference 2003) As she studied the Fa and practiced more and more, her mind became broader and many conflicts were resolved with ease. She knew what she should do in order to be a good person.

Bravely Exposing The Truth of The Persecution

On July 20, 1999, the Chinese Communist Party under the rule of Jiang's regime started persecuting Falun Gong. Ms. Man knew in her heart that Falun Gong is good and practitioners did not do anything wrong to deserve this persecution. It was Falun Gong that gave her a second life. Therefore, she started to tell people the truth about Falun Gong even though the environment was harsh and the persecution was ferocious. She knew that many people had been deceived by the lies and propaganda of the CCP. She was determined to distribute information materials and tell people the truth. She once walked a long way to distribute flyers. Her feet were bleeding and a toe nail fell off, yet she continued as if nothing had happened. She thought, "You don't want me to distribute these flyers. You try to hinder me. But you can't make me give up. I must do what I need to do." One day she noticed blood trails on the floor after she got back home from a flyer distributing tour. She asked her son, "What is that?" Her son took a look and told her, "Mom, that is blood from your feet." As she pulled off her socks, she noticed that her feet were soaked in blood. That day she had walked for five hours.

Continue Efforts to End the Persecution After Leaving China

In 2002, Ms. Man came to Australia. The environment here is much better than in China. She continues to clarify the truth by calling people in China and telling them the truth of the CCP's attempt to frame and persecute Falun Gong. She collects signatures from Australian people on appeal letters to stop the persecution. She goes to tourist sites to talk to Chinese tourists and persuade them to quit the CCP and its associated organizations, rain or shine.

Ms. Man feels very fortunate to be a Falun Gong practitioner. She said, "I thank benevolent Teacher for saving me and for giving me a whole new healthy life. A thousand words could not express my gratitude. I just want to say, 'Falun Dafa is good! Truthfulness-Benevolence-Forbearance is good!'" She hopes more and more people will get to know about Falun Gong.