Sydney: Activities Held to Support the Seventy-Eight Million People Who Have Withdrawn from the Chinese Communist Party (Photos) 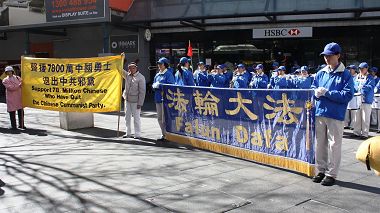 The Divine Land Marching Band performs during the rally

Mr. Ma Hengjuan, a representative from the service center, said that the purpose of the activities is to call upon the Chinese people to join the movement and quit the Party.

The volunteers of the service center held banners and set up display boards. Many people read the materials.

The volunteers also set up several booths in Chinatown, publicizing the movement and helping people to quit the Party. Many Chinese people passed by the booths and took the informational materials. Some of them quit the Party after talking with volunteers from the service center.

Lingling, a volunteer at the service center, said, "I've tried my best to help my fellow Chinese. I am not deterred when encountering various attitudes. Once, I talked to a young Chinese woman, but she refused to quit the Party and walked away. I walked with her and talked to her some more. Finally, she quit the Party and thanked me. Today, all the volunteers of the center came. The event has had a very good effect today."

The Divine Land Marching Band participated in the event and performed several songs, which attracted many people.