(Clearwisdom.net) A local practitioner, age 74, started practicing Falun Gong before the persecution began in 1999. In January 2002, she fell while riding a bike. Since she was unable to move her leg, her family took her to a hospital.

An x-ray showed that her hip bone was fractured, so she had surgery, during which a steel bolt was installed in her hip. The surgical incision was 16 centimeters in length (6.3 inches) and 18 stitches were used.

Despite this accident, the practitioner was still determined in practicing cultivation. She focused her mind and maintained righteous thoughts at all times. She kept practicing the exercises even when she was bedridden. She also studied the Fa to rid herself of everyday people's concepts, including, "The doctor said to rest in bed," "Her family said she had to rest for at least 100 days due to the bone fracture," and "She should take enough calcium supplements for the fractured bone to grow again." She retained the thought that she was a Falun Dafa disciple, and every day she tried to sit up and move. She put a lot of effort into overcoming the hardship. With Master's support, she soon started to stand up again and did not need anyone's help.

Her family and relatives kept observing this older practitioner, and they all agreed that practitioners were different than everyday people. If this kind of accident had happened to an everyday person of the same age, the person would probably be bedridden for the rest of his or her life.

On May 4, 2009, while practicing the fourth exercise, she felt a bump arise on her old surgery incision. She stopped her exercise and pulled an object out of the skin. She experienced no pain and there wasn't any bleeding. She saw that the object was the steel bolt used to fix her fractured hip bone several years prior. The bolt was 8 millimeters in diameter (0.3 inches) and 9 centimeters (3.5 inches) in length. There was just a little blood on the bolt. She put the skin back to where it should have been and it healed without any medicine. 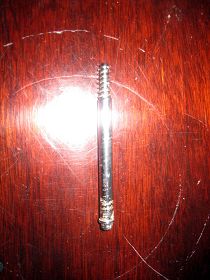 The family members of the practitioner were all amazed at what had happened. The people who knew the facts were all astonished. The practitioner said, "I'd like to tell everyone that this is the power of Falun Dafa!"