(Clearwisdom.net) To commemorate Zheng He's adventure to the west with his treasure fleet, an annual traditional celebration was held in central Java from August 5 to 7, 2010. Falun Gong practitioners had a table at the festival and introduced their practice to passersby.

In 1405, Zheng He led a fleet and traveled to the west seven times, bringing Chinese culture, agriculture and industrial technology, advanced navigation technology, and trade to over 30 countries. His adventures helped the Ming Dynasty to keep good relations with other countries and promote the development of culture, economy and trade in the places he visited. People in southern Asia still remember this friendly messenger and keeps temples and historical sites in his memory. 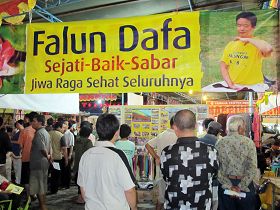 Falun Gong's table and posters attracted many local Chinese and Indonesians' attention. Many Chinese people had misunderstandings about Falun Dafa because of the Chinese regime's slanderous propaganda against it. Practitioners patiently clarified the facts of the persecution and explained the benefits of the practice. Many people understood what has really happened in the persecution and asked to learn Falun Dafa. 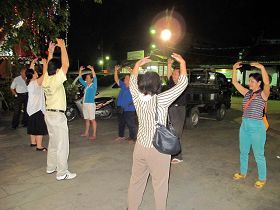 Visitors learn the second exercise with a Falun Gong practitioner. 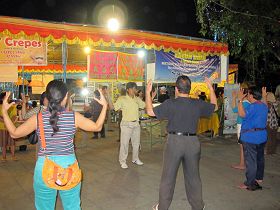 Visitors learn the second exercise with a Falun Gong practitioner.

Huang Zhengdao, 50, was a driver. He could already feel the difference after he learned the third and fourth exercises. "This is unbelievable. It feels like I have rested three to four hours. I am so relaxed and not tired anymore," said Huang.

A female doctor in her 40s said that she felt strong energy when she did the third and fourth exercises. She was surprised to find herself feeling comfortable and highly relaxed. She asked about practice sites and said that she would continue to do the exercises. 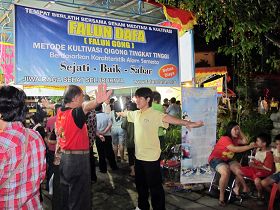 Forty-eight-year-old engineer Huang Huaxin came from Surabaya, eastern Java. He said he learned about Falun Gong and the persecution years ago from a newspaper. He wanted to learn the practice at that time but could not find anyone to teach him. After learning the first exercise on the spot, the strong energy made him feel warm and relaxed. Huang enjoyed the exercise a lot. He said that he knew many people who wanted to do the exercises and that he would definitely continue to practice.

Wu Lizheng is a housewife. After she learned the first and second exercises, she was excited because she could feel the energy and warmth going through her body. Her fingers were stiff and could hardly bend before she did the exercises, but afterwards, they became flexible. She asked her husband to do the exercises with her and took a copy of the book Zhuan Falun home.

Ms. Lin works in Dajue Temple. She introduced many of her friends to Falun Dafa during the festival. She hopes that her friends can learn more about Falun Dafa and gain mental and physical fitness through the practice.