(Clearwisdom.net) In early August 2010, the capital of Scotland once again welcomed the famous Edinburgh International Arts Fair, and many tourists from all over the world. On this special day, Falun Gong practitioners from different parts of the UK came to this beautiful city to clarify the truth about Falun Gong to the large number of visitors, and expose the Chinese Communist Party's (CCP) persecution of Falun Gong. They also called on the numerous assembled people to help stop the persecution together. 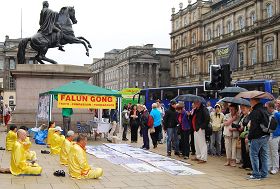 During the 2010 Edinburgh International Arts Festival, Falun Gong practitioners do their exercises in the busy shopping district 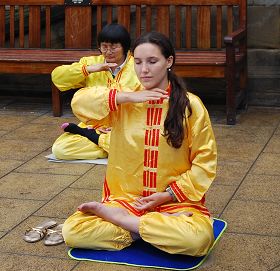 Falun Gong practitioners put up an exhibition table in the early morning in the busy St. James place. They established the scene meticulously, setting up comprehensive exhibition boards showing the truth about Falun Gong, and banners. Eight practitioners wearing golden-colored exercise suits continued to demonstrate the exercises. Also, some practitioners handed out Falun Gong informational materials to the ongoing stream of people. By the end of the day, a large number of people had stopped to see the exercise demonstration, and the number of people who received flyers was numerous, many of whom took the initiative to sign their names on a petition. Moreover between ten and twenty people expressed their desire to quit the CCP and its affiliated organizations.

Every time Falun Gong practitioners have come here it has enabled more and more of the Scottish people come to understand the true situation. Mr. Mike McOrmorck, who lives in Edinburgh, is a handicapped man who uses a wheelchair. At first he fixed his eyes on the Falun Gong practitioners, then he drove his wheelchair in front of the truth clarification exhibition display panels on the ground. He immediately requested to sign his name on the petition. He said to reporters, "I don't know why they should be persecuted, I feel very sad about this, so I signed my name on the petition." "People live on one planet, why should we treat each other so brutally? For instance I don't know you, but I don't have any hostility towards you." Mike, who saw the Falun Gong exercise demonstration for the first time told reporters, "This exercise method is great, and it brings people a lot of tranquility. I like it very much." 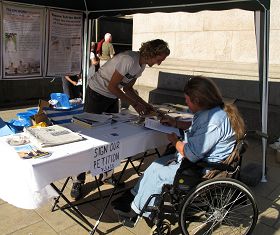 Mike, who is seated in the wheelchair, immediately requests to sign his name on the petition to oppose the persecution

Many tourists from other countries came to understand the truth about Falun Gong as well. By nightfall when the practitioners were getting ready to leave after completing the whole day's activities, a young woman from Spain hurriedly came to the front of the booth, and after she had asked for basic information and facts, she immediately signed her name on the petition, and happily left after receiving an informational CD.

A young man from Poland stood for a long while in front of the display panels entitled "Rescue the Falun Gong children," and then without hesitation walked to the information table and signed his name. He told reporters, "I just can't believe they (the CCP) can be so cruel towards children. Why do they want to be like this? Children are very helpless when faced with persecution." Coming from a previously Communist country, he already had an ample understanding of the nature of the Communist party. He had words of advice for the Chinese people, saying they must give up Communism themselves. He said, "Communism was evil from its beginning, and moreover it is completely bad, and has never changed. From the start with Stalin, they have always been like that. They sent civilians to prisons, and to Siberia." "When Communism came into Poland, many Polish people were murdered in the forests." He also encouraged Falun Gong practitioners to continue with efforts to clarify the truth. He said, "You must continue to persist in calling for justice, don't stop. In the current stage, only this way will there be hope. This is such a good thing, so you mustn't stop." 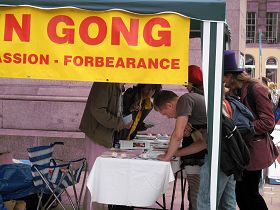 He told the reporter his feelings after seeing people outside China practicing Falun Gong in freedom, "In the mainland one can't see anything like this, there isn't an environment of such freedom." Xiaoli also said that he was very willing to have a look, and to listen and thereby come to understand the true situation. He said, "I feel that there is nothing wrong with coming to understand a little more, helping myself to see clearly what is going on." 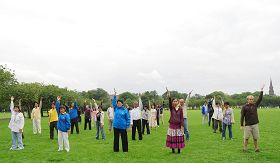 Falun Gong practitioners also participated in the Edinburgh International Arts Day Parade once again on August 8, 2010, and continued to hold truth clarification activities on the street.