(Clearwisdom.net) August 6, 2010 marks the 65th Anniversary of the Hiroshima bombing. The annual commemoration was held in the Peace Park. Local Falun Gong practitioners took this chance to expose the brutal persecution that is happening in China to the public. 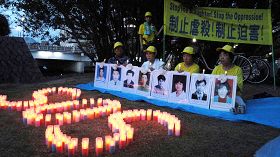 Practitioners arrived at the park at 6 o'clock in the morning. They held banners, set up display boards and passed out truth-clarifying materials about the persecution of Falun Gong in China. In the afternoon, practitioners demonstrated the exercises. After that, they held a candlelight vigil, commemorating those who have died during the persecution.