Indonesia: Practitioners Call on Singapore Government not to Join the CCP in the Persecution of Falun Gong (Photos) 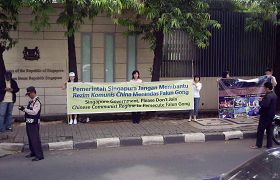 Two Singapore Falun Gong practitioners who had been forced to leave Singapore related their experience.

Ms. Huang Fuqing, originally from China, had worked in Singapore for many years. In August 2008, when Ms. Huang returned to Singapore from attending the Indonesian Falun Dafa Fa conference, the Singapore government denied her entry, and she was left no opportunity to properly handle her rented apartment, daily necessities and banking in Singapore.

Ms. Zhao accompanied her 12-year-old daughter to study in Singapore. When her social visit pass expired, the Singapore government refused to renew her pass and forced her to leave Singapore. The reason for this incident is that Ms. Zhao is a Falun Gong practitioner. Her daughter is left in Singapore to study alone.

Ms. Zhao said in an interview, "We are here on behalf of all Falun Gong practitioners, and all kindhearted people around the world, to peacefully appeal to the Singapore government not to follow the evil communist party, and not to sell its conscience and human rights for the sake of economic interests. Singapore in an independent country, and Singapore's people are kindhearted. Over more than 100 years, communism has slaughtered countless lives. History has indicated that those who follow the communist party will not have a good ending. The Singapore government should awaken, and stop joining the communist regime to persecute Falun Gong, for the good future of Singapore and its people."