(Clearwisdom.net) More than 300 groups participated in the Independence Day Parade in Redwood City, a suburb of San Francisco. As one of the few Chinese groups, the Falun Gong contingent was warmly welcomed. 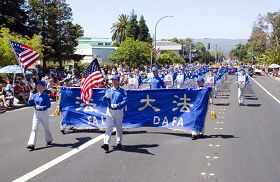 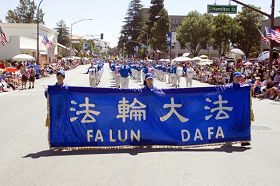 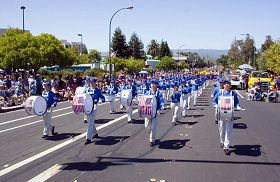 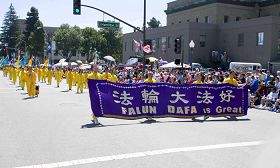 The Divine Land Marching Band, consisting of 200 Falun Gong practitioners, performed in the parade. When they passed the stage, the host briefly introduced Falun Gong to the spectators. One of the organizers highly praised the band. Some local citizens said that they see the band every year in this parade, and they really like it because they have a lot of members, their music is beautiful, and their costumes are colorful.

This was the 72nd Independence Day Parade in Redwood. Hundreds of groups participate every year and more than 200 thousand people watch it. It is one of the largest and oldest parades in northern California.