(Clearwisdom.net) On July 4, more than 100 groups from all over the United States were invited to participate in the Independence Day Parade in Washington D.C. Falun Gong's entry, consisting of the 150 member Divine Land Marching Band and the 50 member waist drum team was the largest contingent in the parade. 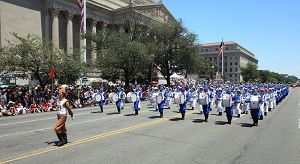 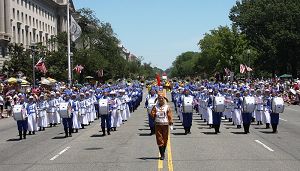 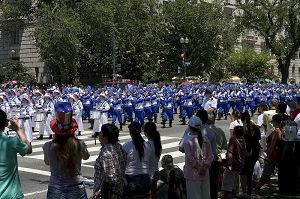 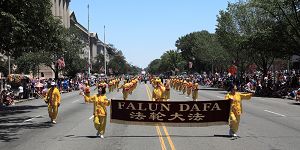 The Divine Land Marching Band performed six songs during their fifth appearance in this parade. Band member Mr. Liang said this parade is the largest one that the band has performed in, so everyone practiced hard.

Many people liked the performances. Bianca, a tourist from Texas, had never seen a Falun Gong practitioner performance before. She said the band was one the best groups in the parade. Parker from Salt Lake City agreed. Mr. Ma, a local Chinese, liked the band the most. "Their costumes have the Chinese style," Mr. Ma said, "I hope to see them again in the future."