(Clearwisdom.net) From the 5th to 6th June 2010, the annual Exeter Respect Festival was held in England's southwestern city of Exeter. English Falun Gong practitioners received an invitation to take part in the event last year, and this year they were once again invited by the host to take part in this multi-cultural arts event. 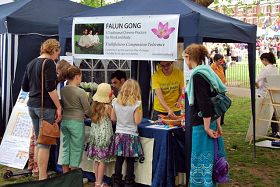 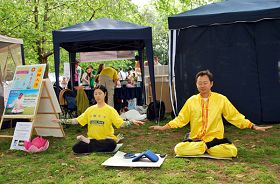 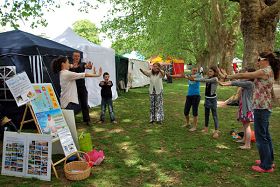 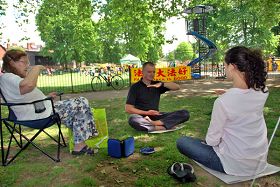 On the 5th and 6th of June, Belmont Park was full of participants of diverse ethnicities, sharing their culture, art, and local customs. The events attracted many visitors.

The Falun Gong booth was decorated with golden banners reading "Falun Dafa Hao" ("Falun Dafa is good"). At the front and rear of the exhibition table, were a series of display boards introducing Falun Gong and exhibiting the beauty of Dafa. On the display boards, "Truthfulness-Compassion-Forbearance" was written in different languages, conveying a beautiful message to the world's people. In front of the information table, there were several display tables that exposed the Chinese Communist Party's (CCP) persecution of Falun Gong. There was a petition calling for an end to the persecution, as well as truth-clarification materials and brochures introducing the Falun Gong exercises.

Around the exhibition table, the paper lotus flowers made by practitioners caught visitors' attention. Many parents brought their children over and learned with them how to make lotus flowers, and at the same time they read the information on the display boards, and asked practitioners questions about Falun Gong. People were deeply shocked by the CCP's persecution of Falun Gong in China. They couldn't understand how such a brutal persecution could happen in another part of the world. Many people signed the petition against the persecution.

Behind the display table, practitioners demonstrated the five Falun Gong exercises to the melodious and peaceful music. Many people stopped to watch. On the first day when the activities were about to conclude, a local reporter took several photos of practitioners practicing the exercises, which were published in a local newspaper. Many people also came forward to ask whether there were any places where they could practice Falun Gong in Exeter.

On the second day of activities, practitioners arranged an exercise teaching activity. Before it started, many people came early and waited, and many children also came with their parents and learned the exercises with great enthusiasm. For the entire evening, practitioners taught the Falun Gong exercises to group after group. After they learned the exercises, people's state of mind was very joyous, and they warmly struck up conversation with practitioners. When several Chinese students passed by the Falun Gong display table, some took photos and carefully read the display boards exposing the CCP's persecution of Falun Gong.

A college student from Sichuan, China earnestly read the information on a display board, when a practitioner handed her some truth-clarification materials. She then asked if there was a place in Exeter where she could learn Falun Gong. She was very happy to hear that she could download the Dafa books and exercise videos for free from the minghui.ca website. She asked many questions regarding Falun Gong, and practitioners gave her detailed answers. When it came to time for her to go, the young woman accepted with pleasure the truth-clarification materials given to her by practitioners and the Nine Commentaries on the Communist Party video, and she expressed how she would like to learn Falun Gong in the future.

“In Order to Rescue Lu Tong, Mother and Wife Have Waited for One Year Outside the Police Station (Photo)”