In Order to Rescue Lu Tong, Mother and Wife Have Waited for One Year Outside the Police Station (Photo)

(Clearwisdom.net) Mr. Lu Tong, a Falun Gong practitioner from Suzhou City, Jiangsu Province, is illegally detained under a four-year prison sentence. His mother is in her seventies and his wife has an eye disability. Over the past year, Mr. Lu's mother and wife have repeatedly appealed to the Caixiang Police Station in Jinchang District, asking to visit Mr. Lu and to have him released at once. Their request consistently denied, the women have appealed at the Caixiang Police Station more than 100 times. 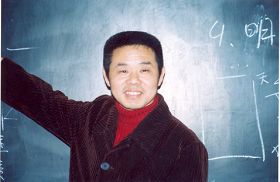 Mr. Lu Tong was illegally arrested by officials from the Caixiang Police Station on July 4, 2008. He was sentenced to four years of imprisonment by the Jinchang Court on December 17, 2008, and was sent to Wuxi Prison. Mr. Lu's brother and daughter went to the prison to apply for a visit many times; however, officials from the prison always refused them, only replying that Mr. Lu was "Forbidden visitation forever."

A righteous lawyer provided assistance and brought some hope to the family. The lawyer met with Mr. Lu Tong under close monitoring by prison staff in Wuxi Prison. During the meeting with the lawyer, Mr. Lu was very stiff and quiet, his head lowered, and he only showed his reply by nodding his head or answering with one or two words. The lawyer said that he could feel the heavy pressure on Mr. Lu, and judging from Mr. Lu's demeanor, he was concerned that he had been physically abused, threatened and given "special education" before the meeting.

Afterwards, evidence proved that Xu Linxin, head of the Prison Affairs Section, did threaten Lu Tong and had forbidden him to engage a lawyer. At that time, Mr. Lu was watched continuously by prisoners in Ward 14 in Wuxi Prison, causing intense stress. No one can really understand this kind of mental persecution except those who have personally experienced it. In addition, Mr. Lu was often forbidden to use the toilet or to sleep. He often suffered indignities. In order to achieve the so-called "reform" or "transformation," officials from the prison threatened and punished prisoners for being related to Mr. Lu, and even arrested his daughter in order to threaten him.

Mr. Lu Tong's elderly mother and his wife went through many bureaucratic loopholes appealing for a visit and for Mr. Lu's immediate release. However, Wuxi Prison officials stopped their request, and even transferred Mr. Lu to Hongzehu Prison, located several hundred kilometers away from Suzhou City.