(Clearwisdom.net) The famous Sun Moon Lake is a major attraction for Mainland Chinese tourists. More than 1,000 Falun Gong practitioners from central Taiwan gathered here on July 17, 2010, to commemorate the more than 3,000 Falun Dafa practitioners who died as a result of persecution over the past 11 years. They gathered also in the hopes that more people would pay attention to the persecution and together help end it. 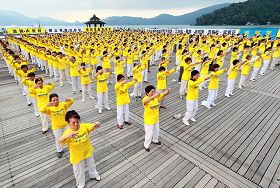 Efforts to Clarify the Facts 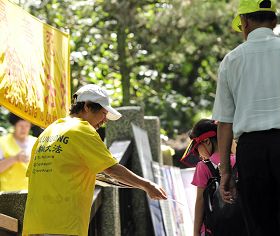 A practitioner hands out a flyer outside Xuanguang Temple

Practitioners prop up a banner in front of Wenwu Temple 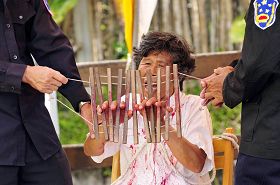 Reenactment of a torture method 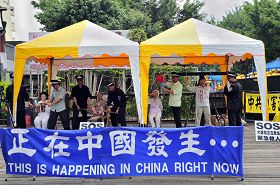 The reactions from Chinese tourists also inspire Ms. Peng, eliciting her comment that once when she was about to leave Xuanguang Temple, an older man smiled at her. She thought, "I won't let him miss this opportunity; I'll tell him about Falun Gong." She said to him, "Falun Dafa is good! Truthfulness, Compassion, and Forbearance are good!" The older man replied, "Good! Good! Good!" She went on, "You can ensure your safety by withdrawing from the Communist Party and its affiliated organizations. Since the Party has committed so many crimes, some of which are well known worldwide, the heavens will punish the Party! I can help you quit with a pseudonym, so you'll have a great future!" He paused for a moment before firmly saying, "Yes! Thank you!" Ms. Peng said that he must have felt her genuine concern for him.

Ms. Liu from Puli has done similar volunteer work at Sun Moon Lake for several years. As more and more Chinese tourists have learned the facts, most tour guides support Falun Gong. At first she was afraid of Chinese tourists because they were aggressive, but after speaking with other practitioners, she realized the importance of this work and has made tremendous breakthroughs. She can now easily strike up a conversation with a Chinese tourist and identify and clear up any misconceptions.

Local vendors and businesses have also learned about the happenings over time. One older woman who sells sautéed eggs by Xuanguang Temple found Udumbara flowers on the window of her stand. One practitioner told her that this rare and precious flower blooms only once every 3,000 years. Upon hearing this, the egg vendor felt proud and happily introduced the flower to the other business owners as well as a sign of the wonders of Falun Dafa!

The candlelight vigil in Yidashao opened with a flag-and-drum formation, which drew the attention of many tourists from all over the world. The picture exhibit explained the persecution, and also how Falun Dafa is embraced around the world. Practitioners reenacted torture that takes place in Chinese prisons and labor camps. 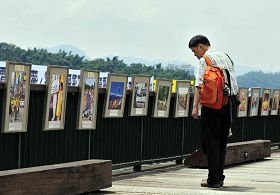 A man pays close attention to the exhibition boards

A retired couple from Taichung City was stunned when they saw the torture photos, even though they had previously known about the persecution of Falun Gong. They were incredulous that a government would brutalize its citizens to such an extent. It reminded them of some of their friends who went to Mainland China to do business but failed to make a profit, and now they cannot return to Taiwan.

Mr. Lin, a local Sun Moon Lake resident, mentioned that he used to avoid the topic of Falun Gong. But he later rented a residence to Falun Gong practitioners. Based on interactions with them, he thought two things about Falun Gong were great. First, it makes people healthy; second, they are good people. He explained that if someone has a calm mind and sees things in a good way, then that reflects his level. He hoped Falun Gong practitioners would hold even grander events, to help more people learn about the practice.

Candles Light Up Hope and Courage

It suddenly began to pour at 5:00 p.m., but the practitioners remained unaffected, even though almost all of them were soaked. They continued to demonstrate the exercises. The rain stopped at dusk. Practitioners returned to the square to commemorate fellow practitioners killed during the persecution. 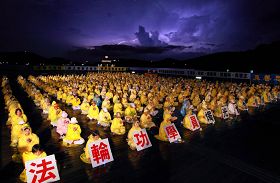 Ms. Ye from Chiayi County commented that getting wet was nothing compared to what practitioners in Mainland China had to go through, and that is why she told herself to continue this righteous effort.