(Clearwisdom.net) On July 25, 2010, practitioners in France gathered at Human Rights Square in Paris to hold a series of activities to call for an end to the eleven-year persecution of Falun Gong. 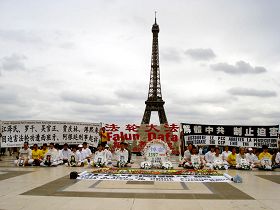 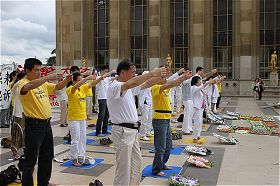 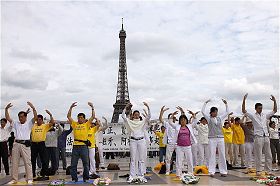 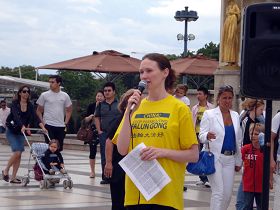 Practitioner introduces Falun Gong and information about the persecution to passersby 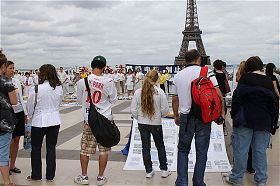 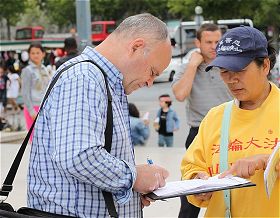 Practitioners lit candles on the square to commemorate the 3,397 practitioners who have died as a result of the persecution in China.

In order to raise awareness about the persecution, during the past eleven years, practitioners in France have come to Human Rights Square every Sunday to display truth clarification photo boards, demonstrate the exercises, and distribute information about Falun Gong and the persecution. They tell people how practitioners in mainland China have resisted the Chinese Communist regime's frenzied persecution with great compassion and tolerance. These people who cultivate Truthfulness-Compassion-Forbearance have been subjected to forced labor, imprisonment, torture, and even organ harvesting while still alive. The regime has committed monstrous crimes. Many of those who learned about the true situation signed the petition to show their support for Falun Gong.

Falun Gong, also known as Falun Dafa, is a traditional Chinese spiritual discipline for mind and body. The practice involves slow, gentle movements and meditation. It is easy to learn, enjoyable to practice, and free of charge. Its principles are based on Truthfulness-Compassion-Forbearance. The practice began in China in 1992 and quickly spread by word of mouth throughout China and then beyond. Its beneficial effects in uplifting an individual's physical, mental, and spiritual health, not to mention its positive influence in the community and society as a whole, have been undeniable. In fact, Falun Gong has been practiced by over 100 million people in more than 100 countries. The main works of Falun Gong are available in over 30 languages.

“Western Practitioner: Finding Out What Compassion Means While Working on Dafa Projects”