(Clearwisdom.net) At noon on July 23, 2010, more than 3,000 Falun Gong practitioners from around the world and their supporters gathered in Washington DC to march in the burning sun to call for an end to the brutal persecution of Falun Gong by the Chinese Communist Party (CCP). The grand march began at the Washington Monument and ended at Farragut Square, lasting nearly two hours. 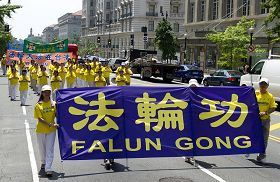 Practitioners demonstrate the exercise during the Washington DC grand parade on July 23, 2010 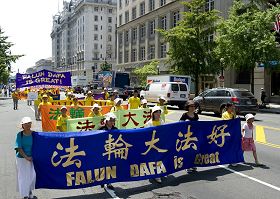 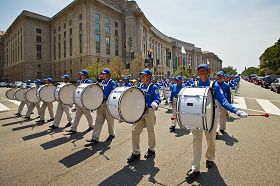 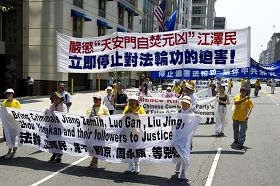 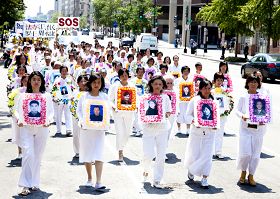 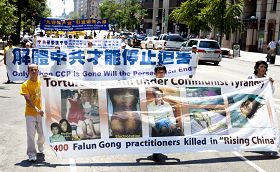 “Only when the CCP is gone, will the persecution end” 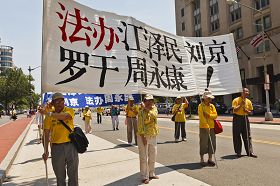 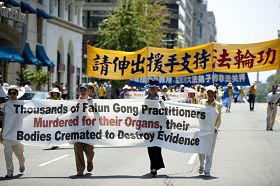 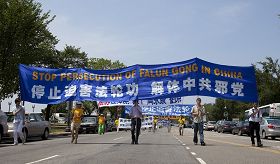 “Stop the persecution of Falun Gong in China”

Practitioners Uphold their Principles at All Costs

“The U.S. Congress overwhelmingly passed H. Res. 605 by a vote of 412 -1 in March 2010, demanding that the Chinese Communist regime immediately stop the persecution of Falun Gong. The resolution was jointly initiated by 81 congress members from different parties, which shows that opposing the persecution of Falun Gong is a common understanding, beyond partisanship and based on humanity.”

“Some people felt puzzled why Falun Gong practitioners do not give up under such a severe persecution. In today's society driven by self-interest, there is a group of people who are unaffected by that, and who would rather sacrifice their freedom and even their own lives for the sake of adhering to and upholding their principles. They have brought light and hope to the world. Amidst eleven years of hardships and tribulations, Falun Dafa practitioners have displayed and spread the goodness of Falun Dafa in the process of clarifying the facts and calling for conscience. The persecutors thought they would 'eradicate Falun Gong within three months', but Falun Gong has instead been spread to more than 100 countries and regions.” 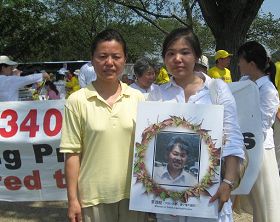 Ms. Li Huiying, daughter of Mr. Li Maoxun who was tortured to death, and Ms. Li's daughter Shi Nuoou at the starting point of the parade

A young lady in white clothing stood at the starting point of the parade, carrying a portrait of Mr. Li Maoxun who was tortured to death. She was in tears. She is Shi Nuoou, the granddaughter of Mr. Li Maoxun. This was the first time that she and her mother participated in activities against the persecution overseas.

Mother Ms. Liu Huiying related in tears the tragic experience: Her father worked in the Dalian City Procuratorate, and she herself worked in a Dalian City Court. They used to live a happy life. However the persecution tore apart their happy family. Mr. Li Maoxun was subjected to a forced labor term in 2001 for remaining steadfast in his belief. He was subjected to severe abuse and was released when he was in critical condition. He died shortly after he returned home. Ms. Li Huiying was arrested for appealing for Falun Gong in Beijing. Her husband divorced her under pressure.

Shi Nuoou spoke of her mother and her best wishes: “The persecution has persisted for eleven years, it is too long. We hope the tragedy that happened to our family will no longer be replayed!”

Why did Practitioners Come from all over the World?

Practitioners participating in today's rally and parade were from all over the world, with different backgrounds and experiences, but they shared the same wish: that is to help people learn the facts and stop the persecution. 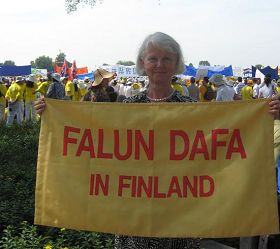 Practitioner Ms. Sinikka Suontakanen from Finland is a teacher at a vocational college.

She began practicing Falun Dafa after the second year of the CCP's persecution of Falun Gong. Falun Dafa has become an indispensable part of her life over the past ten years. This was the third time she has participated in the July 20 activities in Washington DC. She hopes that practitioners in mainland China will soon enjoy the same freedom as she does. 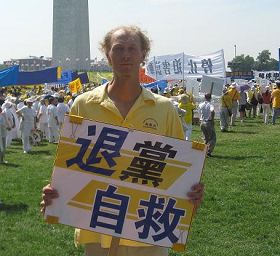 Practitioner Ashley Meloche is from Toronto, Canada. He is in his fifth year of practicing Falun Dafa. He felt it is his responsibility to be here. Falun Dafa helped him understand that one's happiness lies in helping others. His father was proud of him for the positive changes he has gone through. His family often tells him that what he does is a noble matter, and they truly feel proud for his choice.

He said, “I believe Truthfulness-Compassion-Forbearance are universal values. The CCP's eleven-year long persecution of Falun Gong not only targets Falun Gong; it is also against all of humanity.”

“I chose the placard with message reading 'Quit the CCP for Your Own Sake.' I want to tell Chinese people who have been brainwashed by the CCP, be quick to break away. Do not be burdened by the CCP's crimes, and do not share its fate.”

People along the parade routes were amazed by the grand parade. Staff members in the government building on Constitution Ave also came out and watch. 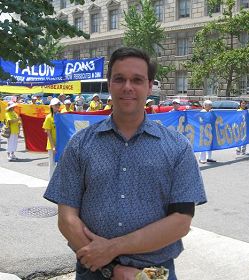 A staff member in the Environmental Protection Agency, by noticing the practitioners' peaceful and grand march, thought Falun Gong manifests a consummate harmony.

An employee of the Department of Human Resources had heard about the persecution of Falun Gong, but the parade helped her learn about the severity of the persecution and the fact that many practitioners have lost their lives for having remained steadfast in their beliefs. She felt shocked and sad. She took many photos, hoping to let more people learn about it.

Another government worker saw and heard about Falun Gong for the first time. He said, “Falun Gong practitioners and their exercises are peaceful. I feel nobody should be persecuted. I hope they will succeed in their efforts against the persecution.”

“Wisconsin: Mayor of the City of Madison Proclaims the Week of July 20, 2010, as Falun Gong Persecution Observance Week”