Wisconsin: Mayor of the City of Madison Proclaims the Week of July 20, 2010, as Falun Gong Persecution Observance Week

(Clearwisdom.net) On July 19, 2010, David J. Cieslewicz, Mayor of the City of Madison, Wisconsin, proclaimed the week of July 20, 2010, as Falun Gong Persecution Observance Week in commemoration of the 11th anniversary of the persecution of Falun Gong practitioners in China by the Chinese Communist Regime.

Whereas, in 1992, Falun Gong, a traditional Chinese spiritual discipline, was first introduced to the public by Master Li Hongzhi and brought both mental and physical benefits to practitioners of Falun Gong around the world;

Whereas, 1998 and 1999, Chinese police began disrupting Falun Gong morning exercises in public parks and searching the homes of the practitioners; and

Whereas, in July 2006, former Canadian Secretary of State David Kilgour and human rights lawyer David Matas published a report titled "Report into Allegations of Organ Harvesting of Falun Gong Practitioners in China," which concluded that large numbers of Falun Gong practitioners are victims of systematic organ harvesting, and that the practice is still ongoing; and

Whereas, the Amnesty International 2008 annual report states that "Falun Gong practitioners were at particularly high risk of torture and other ill-treatment in detention..." and the 2008 Dept. of State's Human Rights Report on China states, "Some foreign observers estimate that Falun Gong adherents constituted at least half of the 250,000 officially recorded inmates in re-education through labor (RTL) camps, while Falun Gong sources overseas placed the number even higher,"

Whereas, July 20, 2010, marks the 11th year of the persecution against Falun Gong in China, and Madison supporters and practitioners will commemorate this date with a candlelight vigil for those who have been persecuted to death for being steadfast in their faith;

Now, Therefore, Be It Resolved, that the Mayor of the City of Madison, Wisconsin, does hereby proclaim the week of July 20, 2010, as 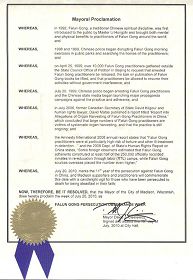 “Switzerland: The Protests Will Continue until the Persecution Ends (Photos)”