(Clearwisdom.net) On July 18, 2010, a rally and march were held in Hong Kong to support Falun Gong and mark the eleventh anniversary of Falun Gong practitioners' peaceful resistance to the persecution. 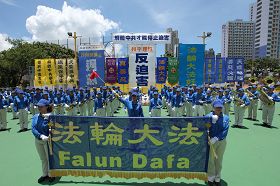 Divine Land Marching Band performs in the rally on July 18.

The statement noted that only by disintegrating CCP can the persecution be stopped and the Chinese people have a good future. "For eleven years, Falun Gong practitioners have kept protesting the CCP's persecution without feeling disheartened, because we believe in the heavenly principle that 'Good will be rewarded with good and evil will meet with retribution' will never change. Evil never prevails over righteous forces. The CCP will be disintegrated and the persecution will end. A bright future will await the world's people."

More than ten dignitaries from Hong Kong, Taiwan and Mainland China, including members of the Hong Kong legislative council, lawyers, writers and democracy advocates, expressed their support for Falun Gong practitioners' protest on the spot, or via audio and video records and internet statements.

Mr. Zheng Enchong, a human rights lawyer in Shanghai, stated, "I am a lawyer and will work hard to make the facts about Falun Gong be publicized. I believe that history will restore the reputation of Falun Gong."

Mr. Wen Haibo, a human rights lawyer in Beijing who was an assistant of lawyer Gao Zhisheng, stated, "The CCP regime exerts pressure on human rights lawyers, which results in a decrease in the number of lawyers who will defend Falun Gong practitioners. But I think we should keep doing that, as it is said, 'Winter is here, but spring is not far away.'"

Former member of the Legislative Council and pastor Fung Chiwood said, "Your braveness encourages your friends and other people being suppressed due to belief, ethnicity and religion. Because we have wisdom to differentiate right from wrong, we choose Truth-Compassion-Forbearance."

Mr. Leung Kwok-hung, a Member of the Legislative Council, said, "If we let the CCP regime persecute Falun Gong, it means we encourage CCP persecutes others and then ourselves at last. I hope everyone will support Falun Gong's basic human rights and freedom."

After the rally, the march started from Cheung Sha Wan Playground at 2 p.m. and passed through busy business streets. The march was led by the Divine Land Marching Band. There were various banners exposing the CCP's persecution. The magnificent drum sounds and music attracted many people to watch. Many Chinese tourists saw such the march for the first time and took photos. Many were touched.

Falun Gong practitioners called on people to quit the CCP, and some tourists renounced the CCP on the spot and processed their withdrawals.

The march ended at Star Ferry Pier. The event concluded with performances of the drum team.

“London, UK: Eight Years of Peaceful Protest in front of the Chinese Embassy”

“Mr. Yang Yongli Tells about the Persecution that He Has Been Through”