London, UK: Eight Years of Peaceful Protest in front of the Chinese Embassy

(Clearwisdom.net) Falun Gong practitioners started a peaceful protest in front of the Chinese Embassy in London, UK. on June 5, 2002. The purpose is to urge the Chinese Communist Party (CCP) to stop the persecution and set free all incarcerated practitioners, returning the otherwise untarnished reputation to the peaceful practice. The protest has been ongoing now for over eight years, and many in the local community continue to express their support and admiration. 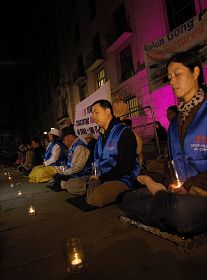 Outside of China, Falun Gong proves to be very popular and has spread to over one hundred countries. People practice freely and under the protection of local laws. Meanwhile, out of concern for their fellow practitioners in mainland China who are suffering the persecution, overseas practitioners have voluntarily organized various peaceful protests and information awareness activities, calling for a stop to the persecution. The peaceful appeal in front of the Chinese Embassy in London is one of those activities.

For over eight years, what kind of people persists with the peaceful protest each day irrespective of the weather or holidays? To shed some light on this the reporter interviewed a London practitioner Ms. Gao, who is one of those familiar faces in front of the embassy.

According to Ms. Gao, the practitioners who participate in the 24-hour vigil are from all walks of life, including the retired and the young, Chinese and Westerners, professionals such as university professors, senior researchers, engineers from world class organizations, as well as housewives and students. A rotation is kept so that professionals normally show up before and after work or at night. During the day, retired practitioners, housewives or students hold the fort. At the approved protest site in front of the embassy, a large poster that exposes the CCP's atrocities and demands immediate stop to the persecution is on display all-year-round. Practitioners do exercises and distribute information leaflets to passers-by so that more people can learn about the fact of Falun Gong and the persecution.

Because the practice site is outdoors, there is no shelter for wind or rain. When it pours, even a raincoat can not keep one dry. They have to withstand the burning sunshine in the summer or freezing coldness in the winter. When asked what kind of belief motivated her to stick with it for over eight years? Ms. Gao answered, "I benefited in mind and body from practicing Falun Gong. I truly experienced the grace of Falun Gong. Falun Gong is being persecuted in mainland China. Fellow practitioners suffer brutal persecution. I cannot keep silence, I have to stand up to say 'No'. The persecution will stop when more and more people say 'No'." Ms. Gao continued, "My firm belief in 'Truthfulness-Compassion-Forbearance' saw me through the eight years of tribulations. The public support and encouragement also motivates me."

According to Ms. Gao, throughout the years many people sent flowers to show support. A nearby restaurant often sends sandwiches to practitioners. When the poster was being taken down and changed, some people walked over to ask, "Are you going to stop? You must continue. What you are doing is very meaningful. You must persist until the end of persecution."

Ms. Gao is an accountant. She normally rushes to the embassy after work. One evening when Ms. Gao was meditating, a gentleman in a suit came out of a nearby building where a big function was held. He came in front of Ms. Gao and said, "I don't want to disturb you. I just want to talk to you." The gentleman said that his company was close by. He knew that Falun Gong had been protesting there for years. Recently he came back from a trip to China where he mentioned Falun Gong and the protest in front of the Chinese Embassy in a speech. He told the audience, "Falun Gong should be given the freedom of belief. Until China allows Falun Gong to protest like they do in London, the Chinese people will not have real freedom." The gentleman also told Ms. Gao, "Your are 100�orrect in your protest and your demand for ending the persecution. I support you."

Ms. Gao recalled another story. One evening when she was meditating, a car stopped in front of the poster. A young Chinese man who appeared to be a secretary and two elderly Chinese ladies got out of the car. The two ladies watched the poster for a long time. When Ms. Gao went over to offer a leaflet, one of them took Ms. Gao's hand and said, "Do you know that we all know Falun Gong is being persecuted. Jiang Zemin lost popularity for persecuting Falun Gong. Many of us know this in our hearts. You must continue!"

At the end of the interview, Ms. Gao said that the protest in front of the embassy would not end until the CCP stopped persecuting Falun Gong. She hoped that more people in the world would learn about Falun Gong and help stop the persecution.