(Clearwisdom.net) The New York-based Shen Yun Performing Arts was honored with thunderous applause and standing ovations while performing at the San Diego Civic Theatre, in San Diego, California, on July 13-15, 2010. 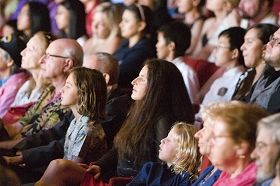 Among the delighted audience members were Rich Israel, the president of the Multiple Sclerosis Society, his wife, daughter, and a friend.

He described the show as "educational, entertaining, and very impressive."

Mr. Israel said that Shen Yun was different than any show that he had seen before.

"I was just blown away by the performers' discipline and talent. I was very unprepared for what I saw, but I was pleasantly surprised because it was entertaining and very well done"

He added, "The drumming I thought was impressive."

Mr. Israel enjoyed "the singing and live orchestra," adding, "I really thought that the entire performance was really entertaining. The show was fantastic. We really had a great time."

Michelle Israel, who works for the San Diego Zoo, was equally impressed.

"The music was amazing. The orchestra was flawless and we really enjoyed the Eastern sounds mixed with the Western music, so it was very different from anything we've heard before and it was absolutely beautiful-- it kept us awake for sure."

"The dancing was unbelievable. My daughter does figure skating and she and her friend were in awe of the dancers," she said, recalling the "incredible" handcrafted costumes that moved with a dancer's movements.

"How beautiful and how perfect they were on stage. The amount of discipline and dedication they have is so evident; it was really remarkable. I hope to achieve that level of dedication someday."

"But it's a wonderful show. Absolutely, totally beyond my expectation. It's almost a spiritual experience and it's worthwhile to me."

She said she would bring her children to next year's show.

"I think my children would love a show like this, where there's dancing and beautiful music and the costumes are amazing. I wish that my three kids were here tonight. I'll have to bring them here another time."

Retired bankers Walter Mantranga and his wife Ruth were delighted by Shen Yun. "So far, it's wonderful to see," said Mr. Mantranga.

Mrs. Mantranga exclaimed, "Absolutely love it. I love the poetry that comes across."

She continued, "The dancers are so talented; the movements are so precise; the synchronization is wonderful. And everyone up there looks like they could be a lead dancer. They're so good."

Mrs. Mantranga loved the vocalists in the show, exclaiming, "Oh my goodness, the tenor and soprano are just divine."

She was particularly moved by the stories told by the performers. "Every move of the body tells a different piece of the story and I just absolutely loved it," she commented.

The couple said that they will definitely be back to see next year's show. "It's beautiful," said Mrs. Mantranga.

She thought everyone should see the show, adding "If you haven't, you must come see it."

Mr. Calik said he was "just totally amazed, intrigued and excited by the costumes and beautiful dance and music."

He said that every performance was "more exciting than the last one" and that the digital backdrops were excellent as they added "so much more meaning" to the stories told by the dancers.

"I'm just happy we came and just happy to share this with you," Mr. Calik concluded.

Retired Canon employee, Kevin Oeding, and his wife, Sunny, were thoroughly delighted by the quality of the performances.

He also thought the animated backdrops "really adds a lot to the show. They're very colorful and you get to see the different regions of China. It kind of helps you picture what they're all about and where they came from."

Mrs. Oeding missed the previous Shen Yun performance in San Diego, so she was particularly happy to attend this year.

"Either they're here, I'm there or I'm there and they're here. So this time I finally made it and I enjoyed it so much," she said.

Mrs. Oeding was impressed by the dancers' "every move" and the stories of Chinese culture. "It's just very incredible," she concluded.

Insurance Broker: "It's Great, It's Unique, It's Different"

Frank McCully, in the insurance business, shared his experience of the show during intermission.

"I think it's great, it's unique, it's different, it's very graceful and beautiful, very serene and very nice," he said.

Mr. McCully said the show was historical and that he appreciated the portrayal of the different ethnicities in China, rather than watching one long story.

"It tells the history of a country and the history of Chinese dance. It gives you more of a perspective of what it's all about there and how it transforms into dance."