(Clearwisdom.net) The following photos are from the article "The Best Way to Keep Fit and Cure Illness is to Practice Falun Gong" published in 1998 in the column "Wishing you good health" from the magazine Tai Lan Nei Wai (兰台内外). The photos are scenes of Falun Gong practitioners from China's Changchun City celebrating the sixth year of Master spreading the Fa and teaching the exercises, with the then Chief of the Bureau of the General Administration of Sports, Mr. Wu Shaozu, visiting the crowd doing the morning exercises.

On May 13, 1992, Master Li Hongzhi started spreading Falun Dafa in Changchun. The profound principles and the miraculous effects spread very rapidly. Not long after, practice sites could be seen virtually everywhere in major cities all over China. 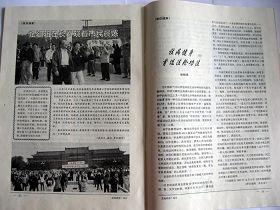 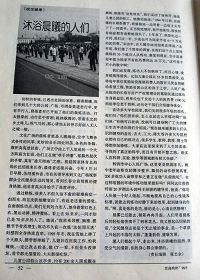 This photo shows thousands of people practicing the exercises that morning. They were quiet and peaceful. Chief of the General Administration of the Sports Bureau Wu Shaozu visited the event in Changchun City Cultural Square with a big smile on his face. Banners displaying "Falun Dafa" and "Celebrating Master Li Hongzhi's Spreading the Fa and Teaching the Exercises for Six Years" stood out for all to see.

The article describes the scene as follows:

"At the Changchun City Cultural Square, the scene of the formation of a big square consisting of thousands of participants is amazing. The "Danshou Chong'guan" movement of the third exercise is displayed. Practitioners' arms appear to float as if they are truly "penetrating heaven and earth."

"Through cultivation, many people are cured of their illnesses. In addition, their skin becomes rosy and smooth and people look very young. A senior named Liu Li with a purple top and black pants looks very energetic. He appears to be in his fifties. However, when asked, we learned that he is actually in his 70s.

"Zhang Xiuqin used to work in Children's Park. She told us that in 1994, after suffering from long-term illnesses, she was so desperate that she wrote her husband a final letter before attempting suicide. She then started practicing Falun Gong and has since ceased to take any medications and saved 60 to 70 thousand (or more)yuan in medical expenses alone, for the country.

"Liu Shaoying, from the practice site at Jilin University, said that fifty-five people practice there regularly. Since starting the practice of Falun Gong, they have saved a combined sum of at least 250,000 yuan in medical expenses for the country every year.

"Ji Pin is a PhD candidate at the University of Technology. He said that many students, teachers, professors and mentors of PhD students started practicing Falun Gong. They have found the true meaning of life and have realized what true science is. Many of them feel that their wisdom has been enhanced and many have made breakthroughs in research, experiments and teaching."

This article was published in 1998. One year later, in 1999, the Chinese Communist Party started publicly persecuting Falun Gong. Suddenly practitioners were subjected to torture and persecution all throughout China. Such wonderful gatherings no longer occur in China, but are now common in Taiwan and other parts of the world not repressed by the grip of China's communist regime.

“When I Am Affected by Fellow Practitioners' Attachments”

“Details of the Persecution of Ms. Wang Xia”