The parade was held in the Italian community of Ottawa and was one of the biggest events of the 36th Annual Italian Week.

Angelo Filoso, president of Ottawa Italian Community, and the organizer of the event, saw the performance of the Divine Land Marching Band at the Tulip Festival on May 24, and was impressed by it, so he invited the band to perform in today's parade.

Mr. Filoso said that the Divine Land Marching Band has its unique cultural characteristic, "We wanted our event to have rich culture, so we invited them." 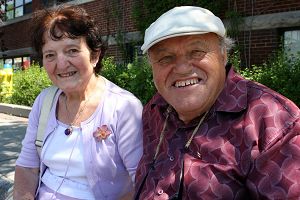 Mr. Frank Vert and his wife, a local couple, watched the parade and highly praised the band. They expressed hope that the band would perform at more events. Romeo Trunzo and his father said that they thought the band was professional and they liked it.

The parade was held on Preston Street, which is called "Little Italy" by the locals. There are 45 thousand Italian residents in Ottawa. The Italian Week is the chance for them to demonstrate their culture and tradition.

St. Anthony of Padua is one of the most famous disciples of St. Francis of Assisi. He was a famous preacher and worker of miracles, and is still known and respected throughout the world.

“After Falun Gong Practice Restores Her Health, an Outstanding Teacher is Sentenced for Disseminating Falun Gong”