(Clearwisdom.net) On April 25, 2010, Falun Gong practitioners in Bavaria, Germany, gathered in front of the Chinese Consulate in Munich to commemorate the 11th anniversary of April 25 Appeal. In addition, they protested the brutal and ongoing persecution of Falun Gong. The event in Munich mirrored similar gatherings held by Falun Gong practitioners around the world. Many German people have heard the story of Falun Gong. Many passers-by expressed their support to the peaceful protest and some of them signed petitions. 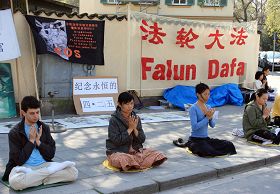 Ms. Huiqing Pan, a Falun Gong practitioner, attended the April 25 appeal 11 years ago. "I still remember it vividly. It's like it just occurred yesterday." Many practitioners from her practice site were there. When they stepped out of the subway station in Xidan, Beijing, they saw many other Falun Gong practitioners arriving for the same purpose. They also noticed a large number of police officers gathered there. As they approached the Appeals Office of State Council, they lined up in an orderly fashion so as not to block the traffic and sidewalk.

She said, "When I first arrived that day, I had high expectations for the government. The Prime Minister agreed to our entire request. However, after three months of the appeal, a large scale persecution of practitioners was launched on July 20. That was the beginning of the persecution. Eleven years have passed, and our resolution to be good people has not changed. We will definitely keep up until the persecution is ceased."

A Chinese lady and her daughter passed by the protest at the Chinese Consulate, and the 7-year-old daughter curiously watched the pictures on the posters. She asked her mom a lot of questions. Her mother stopped and accepted the booklet Nine Commentaries on the Communist Party. She said, "It is not easy for you to persist for such a long time." One of us told her that Falun Gong practitioners are all good people following Truth-Compassion-Forbearance. However, they are persecuted in China. She said the CCP is a mess.