(Clearwisdom.net) On April 29, 2010, United States Commission on International Religious Freedom (USCIRF) released its 2010 annual report at the National Press Club. The report recommended 13 nations including China to be named as Country of Particular Concerns (CPC). "Because of these systematic, ongoing, and egregious violations of religious freedom, USCIRF recommends in 2010 that China again be designated as a "country of particular concern", or CPC. The State Department has designated China as a CPC since 1999." 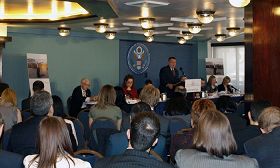 USCIRF released its 2010 annual report at the National Press Club

In the report, USCIRF gave recommendations to US administration and Congress in order to help human rights conditions in China. In particular, the commission recommended that the Secretary of State impose a new sanction targeting officials who perpetuate religious freedom abuses or provinces where religious freedom conditions are most egregious.

Below is an excerpt of the report on the persecution of Falun Gong:

The Chinese government continues to maintain a severe campaign against adherents of the Falun Gong spiritual movement, which it considers an "evil cult" and was banned in 1999. Over the past decade, the government has carried out an unprecedented campaign against the Falun Gong, imprisoning large numbers of practitioners and abusing them in detention. Practitioners who do not renounce their beliefs in detention are subject to torture. There are recent, credible reports of deaths in custody. The Chinese government's systematic campaign to suppress the Falun Gong and other "evil cults" using extrajudicial means is a severe human rights problem.

Credible first-hand accounts from Falun Gong adherents report, and official Chinese government statements confirm, long-term and arbitrary arrests, forced conversions of faith, and torture and mistreatment in detention. Though it is difficult to determine with specificity the number of Falun Gong practitioners in detention during the past year, some estimates place the number at 8,000, with most arrests having occurred prior to the 2008 Beijing Olympics. In the year before the Olympic Games, police waged a concerted campaign to harass and detain known Falun Gong practitioners and brutally suppressed their activity. An estimated 8,037 Falun Gong were detained between December 2007 and August 2008.

Targeting Falun Gong adherents continues to be a high priority for Chinese government security officials. There remains a nationwide campaign to suppress Falun Gong and "transform" its practitioners. A 2009 directive by the Central Committee on the Comprehensive Management of Public Security urged security officials to "strike hard against hostile forces...[including] the infiltration, subversion, and sabotage by 'Falun Gong.'" Similar security instructions were issued in the provinces of Jiangsu, Hubei, Jilin, Guizhou, Yunnan, Henan, Hunan, Anhui, Sichuan, and Shandong, including recommendations for surveillance, cultivation of paid informants, and propaganda efforts.

Current and former Falun Gong practitioners remain incarcerated in re-education through labor camps (RTL) and mental health institutions. Some international observers claim that Falun Gong adherents may comprise as many as half of the 250,000 Chinese detained in RTL camps over the past decade. Provincial officials reportedly offer sizable rewards to anyone who provides information leading to the arrest of a Falun Gong practitioner.

Two Falun Gong practitioners are known to have died in police custody in 2008. The widow of one, Xu Na, remains jailed, serving a three-year sentence for possessing Falun Gong materials. Also in 2008, Chen Zhenping was sentenced to eight years imprisonment for being a Falun Gong practitioner. She was tried in secret without legal representation. In February 2009, public security officials in one municipality of Sichuan province reported that they had detained 114 Falun Gong practitioners. In April 2009, Zhang Xingwu, a retired physics professor from Shandong province, was sentenced to seven years in prison after police discovered Falun Gong literature in his apartment. In late November 2009, a Shanghai court sentenced Liu Jin to three and a half years in prison for downloading and distributing information about Falun Gong on the Internet.

The UN Special Rapporteur on Torture reported that Falun Gong practitioners allegedly make up twothirds of the alleged victims of torture presented to him in China. Numerous allegations of governmentsanctioned organ harvesting from incarcerated practitioners have surfaced within the last several years as well. Independent investigation into the practices of a hospital in Sujiatun, Shenyang proved inconclusive. However, based upon a report from two prominent Canadian human rights activists, international human rights organizations and the Special Rapporteur on Torture have called for an independent investigation and for continued international attention to allegations of organ harvesting from prisoners. The Committee on Torture, a UN treaty- monitoring body, also called on the government during its 2008 review of China to conduct independent investigations to clarify discrepancies in statistics related to organ transplants and allegations of torture of Falun Gong practitioners.

In addition, USCIRF pointed out that the Chinese government continues to harass, detain, beat and make disappear lawyers who attempt to use the Chinese legal system to defend the rights of Chinese citizens such as Falun Gong practitioners and members of house churches. For example, renowned human rights lawyer Gao Zhisheng was made to disappear in 2009. In December 2009, human rights lawyer Wang Yonghang was detained and sentenced to seven years in prison because of his work representing Falun Gong practitioners.

Created by the International Religious Freedom Act of 1998 (IRFA), USCIRF is an independent U.S. government commission that monitors religious freedom worldwide and makes policy recommendations to the President, Secretary of State, and Congress.