(Clearwisdom.net) Zhang Kairui is Dean of Academic Affairs at the Ziqiang Middle School in Hualien City, Taiwan. He has been a Falun Dafa cultivator since 2001. 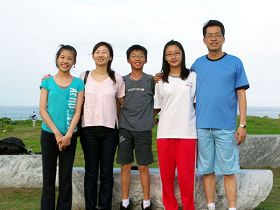 The Road to Cultivation

First, Zhang Kairui's sister-in-law began cultivating Falun Gong. Even though his wife and children also began practicing, Zhang felt he could not leave behind his worldly desires of smoking, drinking, sports, etc. It was only after he witnessed the positive changes in his wife and child that he began his path of cultivation.

Zhang's wife had many minor health problems before she began cultivating, ranging from bone problems and bladder inflammation, to blood in her urine, etc. After cultivating in Falun Gong, her problems were all healed. More importantly, her temper became very gentle. This surprised Zhang greatly. The changes in his children also inspired him to pursue cultivation.

Most middle school students are in the midst of puberty and have unstable temperaments. After his child started practicing Falun Gong however, his mind cooled down immediately. Not only was he able to restrain himself, but it was of his own will.

A New Attitude Toward Teaching

After starting cultivation, Zhang felt that his attitude toward teaching had changed. His relationship with his students became very tight.

As head teacher, Zhang is the disciplinary master of the entire school, and often has to take care of student problems. He recalled his first few days as a teacher, when he was full of enthusiasm and sincerity towards these youths. His utmost efforts however, were rewarded with disregard by some students, and even disrespect. This led him to develop a very bad temper and also gave him a sense of failure.

After he began cultivating, he changed his views, as he then knew that everyone is predestined, "In this life, they are indeed my students, but perhaps they have been my brothers, relatives, or someone who has helped me in a previous life!" He began to redefine his relationships with his students, and treated the students like his own relatives with sincerity. Instead of trying to change them, he began looking at issues from the students' perspectives. Even when the toughest problems arose, his heart was still filled with patience and peace. With more forbearance and fewer conflicts, relationships with students became much more harmonious.

After he began cultivating, Zhang's mind changed greatly and elevated a great deal. Faced with busy work schedules, he now remains filled with happiness and joy. His students have also changed. Instead of being afraid of him (they used to run away even when they saw him at a distance), they are now sincerely willing to communicate with their teacher in the corridors and in the classrooms.

Finding Where He Belongs

Zhang is a science teacher, but read a lot of books on philosophy while in college. He likes to think about problems related to life and the universe. While cultivating in Falun Gong, many of his questions have been answered.

Falun Gong has allowed him to achieve the most beautiful feelings and wonders in life. He has improved his xinxing while cultivating, and is no longer lost in periods of hardship, or flustered in periods of urgency. Instead, a peaceful and harmonious force grew in his heart. It is a mechanism that stabilizes him, and leads him towards where he belongs.

Speaking of the persecution of Falun Gong in China today, Zhang sighed, "Once a righteous force emerges, any unrighteous forces will be exposed, just like what happened to Christ and Sakyamuni thousands of years ago. We should all use our pure human nature to understand and decide which is truly righteous and which is truly evil. Falun Gong teaches Truthfulness-Compassion-Forbearance. After practicing it, a person's values will be changed from deep within their hearts, and it is this force that has angered the Communist Party."

Faced with brutal persecution in China, Falun Gong practitioners have always had great compassion and forbearance toward the innocent sentient beings who have been manipulated by lies, and even toward those who persecute them. In a society where self-interest dominates, they have shown the world what it means to be magnificent. For this reason, Zhang, together with many Falun Gong practitioners outside China, have been trying to do their best to help these selfless cultivators, including traveling halfway around the globe to participate in truth-clarification activities. He hopes that many more people, like him, will be able to cultivate Falun Gong and return to where they belong.