The Story of a Chemistry Teacher (Photo)

(Clearwisdom.net) Before retiring, I was a high school chemistry teacher and had taught in a key provincial high school for almost 30 years. My classes had the highest college and reputable university admission rate in the school. I was frequently awarded the title of "Outstanding Teacher."

I had been surrounded by atheism throughout my student days and my career. On January 18, 1996, a retired teacher came to the school to collect her pay. She looked much more spirited and lively, very much different from how she was before, in fact, nothing like the ill-looking person that she used to be. She said, "I have started to practice Falun Gong." I asked her what Falun Gong was. She told me that it is about the cultivation of Truthfulness-Compassion-Forbearance and being a good person.

The moment I heard "being a good person," I thought to myself: "That is so nice! These days such few people practice Truthfulness-Compassion-Forbearance." My health was not very good at that time. I had a big work load and I stayed at school from 7 a.m. to 8 p.m. My husband worked in the military, and for the most part of the year he was on-site. When I got home in the evenings, I had to take care of the kids. My blood pressure at that time was 105 over 90 and my head always felt numb and swollen. I sought all sorts of treatments from October 1994 to early 1996, but none was effective. The symptoms became worse with every passing day. Sometimes, after preparing my lessons in the office, I was unable to explain them to the class because my mind drew a blank. I had to ask the A-students in the class to do it on my behalf. I had difficulty riding a bicycle straight. The doctor said that these were early symptoms of a stoke.

On January 20, 1996, a colleague and I went to the auditorium of a university to watch the videos of Master's lectures. They lasted for seven days. We felt that this was very positive and taught people goodness. I came to understand after watching the videos that Falun Gong is no ordinary qigong. It is cultivation, and it focuses on the elevation of morality.

Since I specialized in chemistry, I was receptive to the principles that Falun Gong teaches. Furthermore, it was an eye-opening and inspiring experience.

On the third day of the videos, I had symptoms of a cold and diarrhea. However, all the symptoms disappeared on the way there on the fourth day. All the rest of my previous symptoms and complaints disappeared in less than a month. I used to have gynecological problems--frequent bleeding, swollen face and legs--which all completely disappeared. On March 1, the results from a physical were all normal at the start of the semester. My family members witnessed all of this, and they all thought that Falun Gong was really miraculous. This faith is truly extraordinary and quite scientific.

The first day of school--September 2, 1996--we were preparing for an experiment to make chlorine. There was no reaction after mixing concentrated hydrochloric acid and the strong oxidant potassium permanganate. Then we used an alcohol lamp to gently heat it up. Suddenly, there was an explosion. What happened was that the experimenter mistook concentrated sulfuric acid for concentrated hydrochloric acid. Four people were present at the time: the experimenter, two new college graduates, and I. I was the closest to the explosion and suffered the most serious injuries. My eyes felt like they were full of sand, and I could not see a thing.

I was very calm and subconsciously remembered that I was a Falun Gong practitioner. I told everyone to wash off at the sink. I could basically see things after feeling my way to the sink and washed my eyes. Other than the shock caused by the sudden explosion, the other three did not have any serious problems. The school sent the four of us to the hospital. An examination revealed that the vitreous body in one of my eyes was pleated and there was a hole in the pupil of the other. The hole nearly penetrated the pupil. The doctor said that there would be a scar since it was caused by a chemical explosion burn. The school officials told us to stay in the hospital overnight. Because all of my illnesses had disappeared after I started to practice Falun Gong, I asked my family to bring the Falun Gong audiotapes for me to listen to, and I practiced the exercises in the hospital. I felt everything was fine. The eyes of the other three participants were fine, only the skin on their faces was slightly swollen. My family was still concerned when I returned home, so 13 days later I went back to the hospital for a check-up. The doctor was amazed, exclaiming, "How could this be? You have recovered so well!" The test showed that my eyesight was even better than before. Previously, I had to wear a pair of 3.5 glasses for reading, but I no longer need them.

I treat all my students equally, which developed each student's confidence in me. My colleagues and students all treated me as a friend. My classes were always full of positive energy. Some of my students' parents were also practicing Falun Gong, and their kids were all well behaved. Some of the students also practiced Falun Gong. A male student in my class that practiced Falun Gong graduated with a doctoral degree and is the owner of a large, profitable company. His wife also practices. Even now both of them come to visit me with their child every year.

After the CCP started persecuting Falun Gong in July 1999, my husband and other family members told me again and again to be careful. My husband was the bureau chief for political work after retiring from the military. There were some practitioners in his bureau and he knew them well. My husband took this approach on Falun Gong: no reporting to his superiors and no passing on of directives to his subordinates. For example, when his superiors asked for a list of Falun Gong practitioners for brainwashing, he told them there were none. When he was asked to pass on orders to persecute Falun Gong, he put them on indefinite hold and had them go nowhere. My husband's work has been very steady. He has a serious case of diabetes, but it is well under control. On January 3, 1996, of the lunar calendar, it was snowing heavily outside. My husband accidentally fell and broke two ribs. He was unable to move or breathe, so I asked him to try and say, "Falun Dafa is good!" As a result, he recovered within two weeks. My husband said, "Could this be the 'good fortune' you mention?"

My niece used to be a military official. She later suffered a postpartum cold. She could not be exposed to cold water or air and she had to wear heavy clothes even in the summer. Her bedroom windows had to be closed throughout the entire year. Undergoing six years of treatment did not help. She had heard of Falun Gong before but felt that it was too mystical and hard to believe. However, after I mentioned it to her, she wanted to read Falun Gong books to see what it was all about. After reading Zhuan Falun, she said, "I did not know Falun Gong was so respectable. I may not be able to measure up to it." She was sick and in great pain in 2004. I told her to repeat, "Falun Dafa is good. Truthfulness-Compassion-Forbearance is good." A few days later, she called me and told me excitedly, "Now, I believe what Falun Gong says is true. Hurry up, come and teach me!" She did not go into details on the phone. When I got there, she told me that repeating those words had made her feel much better. On the third day after she learned the practice, she found that she could touch cold water when she had to quickly clean a water leak from her washing machine. Previously she had to wear thick rubber gloves. She also tried to open a window and she didn't have a problem with breezes, either. She could also go to work as usual.

My niece is still practicing Falun Gong. Her mother was also a retired military official and she also started to read Falun Gong books. My niece's husband is a government official and her son is studying abroad. Both of them are in favor of her practicing. Her mother of more than 70 lives in the countryside and repeats, "Falun Dafa is good! Truthfulness-Compassion-Forbearance is good!" three times a day. She previously had a hunched back and leg pain when she squatted. Now these are all gone and she even has rosy cheeks. 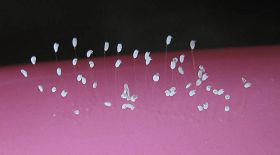 When I went shopping for shampoo in 2007, I noticed a cluster of small white flowers on the plastic shampoo bottle. Several cashiers in the supermarket saw them, too. My child took a photograph of them after I came home (see above). There have been many reports of these sightings since the 1990s. Udumbara flowers have been found blooming all over the world. According to Buddhist scriptures, Udumbara flowers bloom once every three thousand years. When Udumbara flowers bloom, the Holy King will come down to the human world to teach his Fa and offer salvation.

My students all work in different industries. When they have reunions, they often invite me. Many of them have asked me for Falun Gong books and want to find out what it is all about for themselves. Once during a reunion dinner, we were reminiscing about life on campus. The atmosphere was pure and cordial. One student said, "Teacher, you are so kind!" I asked them, "Why is it that I am so kind?" It seemed that they all went back to the old days and said in unison, "Because Falun Dafa is good!"

“My Whole Family Is Now Immersed in the Buddha's Light”