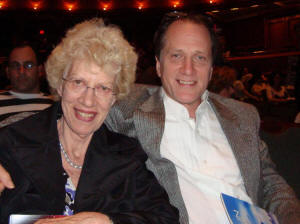 Blane Bostock, a professional musician, attended the show with his wife, Eshowe Pennink, a painter of watercolors.

"It's beautifully done and the precision of the dancers, it's just gorgeous, and the timing! It's just beautiful, I loved it," said Eshowe.

"Unbelievable," added her husband. "You can look at each individual and see that they are fully involved in what they are doing, and yet they are part of a whole, a group. So it's an amazing contrast between an individual's training and also how they hold together."

Mr. Bostock, who has a classical music background and also plays jazz and flamenco music, said, "I play for dancers, and I'm learning how to do that. So I've played with some good dancers from Spain and Mexico and Latin America."

Mr. Bostock not only plays with some of the most well known flamenco dancers in the world, like Liliano Ruiz and Lachino, but he also writes his own music.

He said that seeing Shen Yun had definitely inspired him.

"I'm really inspired by this show. It's giving me ideas for new music to write," he explained. "The feelings I'm getting watching the show, I can sort of translate them into musical ideas."

Mrs. Pennink said that she also gained inspiration from the show.

"All the combinations of the color, just the landscapes ... very inspiring," Mr. Bostock added.

He also found the character of the dancers very inspiring, too, saying, "The people's dedication to what they are doing and their sincerity, they're obviously very focused and sincere about presenting what they're trying to present."

He was pleasantly surprised by the fact Shen Yun toured with it's own live orchestra.

"It's so great ... very strong, lots of extra strings too, I can tell. There are more violins than usual in a Western orchestra. It sounds like it's really well augmented," he said.

Witnessing the Culture of China through Shen Yun 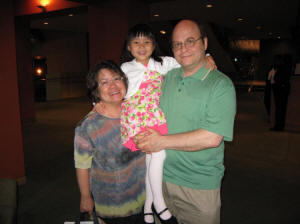 Mr. and Mrs. Gailus came to first Shen Yun 2010 performance in NJPAC on May 22, with their six-year-old daughter.

"I think it gives you a good introduction to Chinese culture, which I'm very interested in. My parents are from the Dominican Republic, so I feel that culture is huge; it represents who you are. So I just came here to expand my knowledge," she said.

Accompanying Bonilla was her friend, Marilyn Figueroa, a nutritionist, who said, "I absolutely love the color and the moves. It's very acrobatic."

When talking about the dancers' mid-air back flips and spins, Bonilla laughed, "They make it look so easy that you want to go up on stage and hop or jump, or do a somersault. But you can't."

She also said that she enjoyed the colorful costumes. "I love the costumes. I think they're absolutely lovely, and the water-sleeves, they really look like water flowing on the waves."

Kim Gailus, an accountant for a large New York retailer, attended the show with her husband, Eric, a computer engineer, and their six-year-old daughter. "It's beautiful," said Kim.

Eric agreed, saying, "It was amazing how they were able to output so much energy for this entire show.

"Everything came together with the music. I think they synchronized quite well."

Analyst: "It was awesome!" 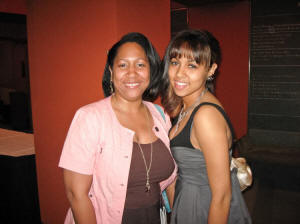 Ms. Lindsey and her daughter came to the first Shen Yun show at NJPAC in Newark on May 22, 2010.

Malika Lindsey, an analyst, came to see the show with her daughter, Jocelyn, a student. "It was awesome," she Malika. "I liked the choreography, I liked the colorful costumes."

Ms. Lindsey said that she wasn't too sure what to expect from the show, but went anyway, due to her keen interest in martial arts and Chinese cinema.

"I was wondering, 'OK, is it going to be in another language? Am I going to be able to follow it all?' But it was great. I would come again," she cheerfully explained.

Her daughter, added, "I didn't really know what to expect. I just came with my mom, but I liked it."

Jocelyn said that she was particularly moved by a dance set entitled Nothing Can Block the Divine Path, which portrays a mother and daughter who are arrested for practicing Falun Dafa.

She said that she liked the way the whole story was played out. "It was different, nothing that I'm used to really, so I enjoyed it" adding, "All their story lines were great, pretty much, so I liked it."

Lindsey said that she would encourage her friends and family to "come and see any performances they may have."