(Clearwisdom.net) From May 7 to 9, the 41st Whole Earth Festival was held at the University of California, Davis. Local practitioners set up a booth to raise awareness about Falun Dafa. During the three-day event, many people expressed their support for Falun Gong and interest in learning the practice. 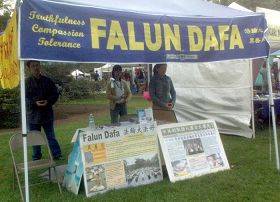 As the practitioners had recently participated in a local parade, practitioners' marching band and beautiful float was still fresh in the memories of many local residents. When they saw the Falun Dafa booth, many stopped by to express their support for ending the persecution in China and to show their appreciation for practitioners' contribution to the local community. After confirming that the Falun Dafa booth represented the same practice that she saw in the parade, one woman greeted the practitioners with a bow of respect and gladly took some materials.

A young UC student told the practitioners that he would study in China for a year. After he learned about the persecution of Falun Gong in China, he said that he would help Chinese students to learn about the truth. He was glad to learn that he could download the Falun Dafa teachings for free on the internet.

A Tibetan woman who stopped at the booth expressed her deep sympathy for the practitioners persecuted in China. She said that she was a loyal audience member of New Tang Dynasty TV and had learned about the persecution from the their programming.

Linda, a new practitioner, demonstrated the exercises at the booth with other practitioners. She shared that she felt great health improvement even though she just had been practicing for a very short time.

Another student told practitioners that he had been learning the exercises online for several months and felt great.

Over the three days, many people who knew about the persecution expressed their sincere wish that the persecution would end soon. In addition, many people learned about the practice at the booth. Practitioners' hand-folded paper lotus flowers were very popular at the festival. Every flower had "Falun Dafa Is Good" or "Truthfulness-Compassion-Forbearance Is Good" printed on them. Many people gratefully accepted the flowers and thanked practitioners for their efforts.

“There Is No Problem that Cannot Be Resolved by Dafa”