(Clearwisdom.net) The Truthfulness-Compassion-Forbearance Art Exhibition was held in the library of the National Cheng Kung University in Tainan, southern Taiwan, on May 9-21, 2010. The 41 paintings depict the grace of Buddha, the joy of practicing Falun Dafa, the brutal persecution, the awakening of conscience, and the rescue of imprisoned practitioners. Many visitors said that they were impressed with the skillful painting techniques and shocked by the severity of the ongoing persecution of Falun Gong in China. 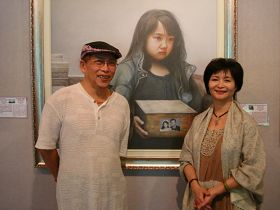 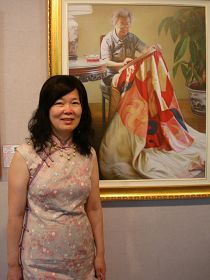 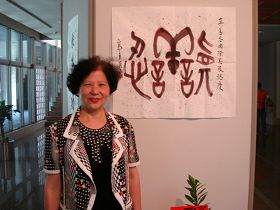 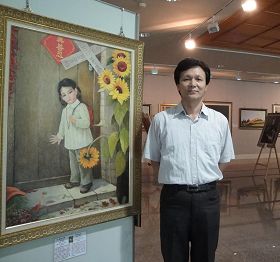 Associate Professor Chan Shih-Huang is touched by the painting "Homeless"

Kang Shih-Hao and his wife, Tsai Yu, are painters. After they saw the paintings, Kang said that expression of emotion was the hardest thing to paint. "Yet the expressions on every face in every painting were exquisite, and vividly portrayed the emotions of pain, steadfastness, and helplessness."

The couple were heartbroken by the girl, who has not the slightest idea about her future, in "Orphan's Tears."

Painter Chang Shu-Te loved "Embroidering on Falun" because the expression and the hands of the old lady reminded her of her mother who passed away years ago. She liked the painting because, "The lady, though she endured so many tribulations, still chose to show the beautiful things in her life."

Painter Kao Yue-yuan learned about the torture and the removal of organs from living Falun Gong practitioners, and that such things were still happening as she spoke. Being a Christian, she condemned the suppression of belief. "All human beings are entitled to freedom of belief." She gave the host her calligraphy with "Truthfulness-Compassion-Forbearance" written on it as a gift and paid the practitioners her respect.

Associate Professor Chan Shih-Huang from the Department of Statistics at the University brought his daughter to the exhibition. He was touched by the painting "Homeless" because, "The little girl wears keys on her neck, but her home was sealed and she could never get back in. The persecution completely destroyed her family!"

Chan noticed the brightness of the painting and said it made him feel that "Falun Gong practitioners, although they have suffered greatly because of the persecution, have hope in their hearts and believe the future will be bright. They continue to improve themselves. They are extraordinary!"

Chan's daughter didn't realize the severity of the persecution until she saw the paintings. She respected the practitioners for "holding onto what they believe with their lives."

Mr. Yang, a businessman, enjoyed the painting "Silent Night," because it made him feeling warm. "The practitioner reads as she holds her child. You can tell that she loves her child and is a good mother."

“Bearing Witness to History: Miracles During the 1992 Oriental Health Expo”