Denmark: Practicing Falun Gong in the King's Garden in the Danish Capital (Photos)

(Clearwisdom.net) The Danish capital of Copenhagen is the transport hub between Northern Europe and the European continent. The train station in the center of Copenhagen is always very crowded and noisy. However, it is a totally different scene in the King's Garden not far from the train station. The large lawn is always green and there are a great variety of trees. In the spring, the flowers are in full bloom while the greenery creates large areas of shade in the summer. In the autumn the ground is covered with golden leaves. Everything looks so pure when covered with white snow in the winter. Nearby the park is an ancient round tower created by King Christian IV for the purpose of studying astronomy. The royal palace, Rosenborg Castle, is located here. The park is the Royal Botanical Garden of Rosenborg Castle, therefore, its name, the King's Garden. When people walk in the park, they feel as if they are in a fairy-tale world. On weekends, visitors can always see a group of people doing a sitting meditation accompanied by melodious music. They are so tranquil that they fit into the environment perfectly, creating a beautiful scene. 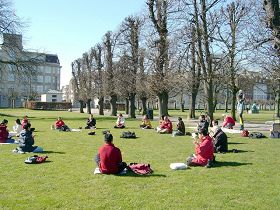 Falun Gong practitioners do the exercises in the King's Garden all year around. 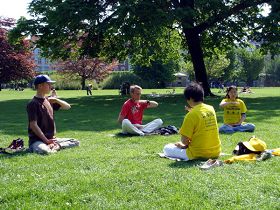 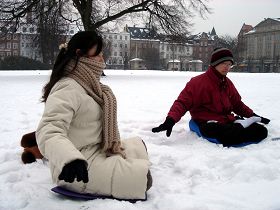 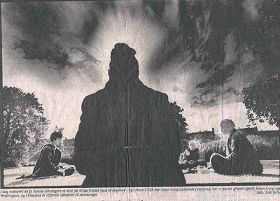 In July 2000, the Danish newspaper Berlingske Tidende reported on Falun Gong. The photo shows practitioners doing the exercises in the King's Garden.

Poul Andersen is a retired mechanical engineer from the Danish Civil Aviation bureau. He started to practice Falun Gong in 1997. At Easter in 1998, he attended the nine-day Falun Gong lectures. He said, "At the end of 1997, I obtained Falun Dafa, and my lifelong journey to seek the truth came to an end. I had waited for this Dafa for 60 years." Poul is 82 this year. He is still very strong and healthy. Through practicing Falun Gong, his mercury poisoning symptoms disappeared. He has been practicing the exercises in the King's Garden since 1998. He studies the Falun Gong teachings and does the exercises everyday. He also goes to the Chinese Embassy in Denmark everyday to tell people the truth about Falun Gong and about the Chinese Communist regime's brutal persecution of Falun Gong. These have become an essential part of his life. 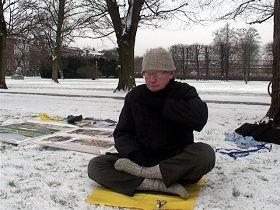 Ms. Liu is one of earliest Falun Gong practitioners in Denmark. She was a student then and didn't have much life experience. After reading Zhuan Falun, she felt that it was very good. She said, "I have a strong desire to cultivate. No obstacles can stop me." At that time, the first nine-day Falun Gong lectures had just concluded, and practitioners started to do the exercises together in the King's Garden. The exercises start at 6:30 a.m. After finishing the fifth exercise, people just get up and go to work or attend classes. Nowadays young people like to get up later. It is difficult for them to get up early in the morning. Ms Liu faced similar difficulty, but she knew that this was part of cultivation, a process of letting go of her attachment. After doing the exercises, she feels very energetic. Ms Liu said, "After practicing Falun Gong for about two weeks, I had a feeling of the Heavenly Circuit being opened. My upper body was opened first, followed by my lower body. My whole body is opened completely. It is such a wonderful feeling. After a while, I felt my mind was very empty sometimes while doing the sitting meditation, without any distracting thoughts and far away from the struggles and fighting common in society." She also had experiences of levitating during the sitting meditation. She has experienced many other things described in Zhuan Falun.

A Western practitioner teaches Falun Gong to Chinese people, an entire family is happy to cultivate

To Stiffen, yoga and qigong have special attractions. He had been searching for the meaning of life all his life, but never found what he wanted until 2000. At the Health Expo in Copenhagen in 2000, he obtained a leaflet about Falun Gong. From then on, he embarked on the journey of cultivation in Falun Gong. He thinks that, if everyone lived according to the principles of Truthfulness-Compassion-Forbearance, the world would be much better and more beautiful. After starting to practice Falun Gong, Stiffen felt that his life became more meaningful and more beautiful. It is difficult to express in words his feeling of finally obtaining the truth, and he is very grateful for Falun Gong.

One day, Stiffen met a Chinese lady, Ms. Lu, in his neighborhood. In the conversation, Stiffen learned that Ms. Lu's mother was not very well and she wanted to find somewhere nearby to learn Falun Gong so that her mother wouldn't need to walk far. Stiffen immediately told her that he could teach her mother Falun Gong. Ms. Lu was delighted. She couldn't have imagined that it would be a Westerner who would come and teach a Chinese qigong.

Later Ms. Lu also started to practice Falun Gong and study Zhuan Falun. Her views about the world changed completely after trying to be a good person by following the principles of Truthfulness-Compassion-Forbearance. Ms. Lu said, "In the past I considered it most important to make money and achieve something in life. Now I understand what belongs to me will not get lost and things that are not mine will not be mine even I fight for them. To be kind and compassionate towards others will ultimately be rewarded."

Stiffen and Ms. Lu later married. Under the parents' influence, their children also understand the principles of Truthfulness-Compassion-Forbearance. Ms. Lu said touchingly, "The two older children like to practice the exercises very much. Sometimes I am worried that if I bring both children with me, it may affect other people's doing exercises. So I would intend to take just the eldest child with me. But the second child would insist on going, too. I myself love to practice Falun Gong with other practitioners in the King's Garden, so I always look forward to the weekend."

Mr. Peng from Hong Kong has lived in Denmark for over ten years. He obtained the information about Falun Gong from his daughter. After reading Zhuan Falun for the first time, he wanted to read it again and again. April 12, 2009, was the most unforgettable day for Mr. Peng. On that day, he started to practice Falun Gong. He said, "I feel very good when I read Zhuan Falun. I have learned many things. It is so nice to try to be a good person by following the principles of Truthfulness-Compassion-Forbearance. Even without doing the Falun Gong exercises, that day when I tried to smoke a cigarette, the taste had totally changed. It was so easy to give up my years of addiction to smoking and drinking. I had wanted to give up before and had tried many methods, but without success. Falun Dafa is truly wonderful."

After cultivating in Falun Gong, great changes occurred in Mr. Peng. He is always happy and in good spirits. His physical wellbeing also improved greatly. He used to often have deep cracks in his fingertips. Now it is much better. About half a year after he started to practice Falun Gong, some of his white hair turned black. He feels much younger.

“Falun Gong - The Bright Light in Our Heart”

“Korea: Attackers of a Quit the CCP Service Center Convicted and Jailed (Photos)”