(Clearwisdom.net) The spring seems yet so far away, as a cold wind still blows in Jiamusi City. On the 11th anniversary of the famous April 25th appeal, my mother left my father and I...

Mom, you used to tell me to be a good person according to Truth-Compassion-Forbearance, take care of our daily life, and warmly help the neighbors. You were intent that we recover quickly, and earn money to pay back our debts during the persecution...Such scenes are like a silent movie playing before my eyes, and beneath the cascading tears I shed.

My mother began cultivating in 1995. On numerous occasions, she was awarded as a city-level model worker. She took care of my grandparents, was a good wife, good mother, and good neighbor. She was so happy and content, and our family was enjoying a peaceful life.

After the persecution started on July 20, 1999, Jiamusi City forced either Falun Gong a practitioner's employer, community administrator, or relatives to "guarantee" that they would not to go to Beijing to appeal or do Falun Gong exercises. Under such huge pressure, my mother still decided to go to Beijing to appeal in October 1999. Beijing police arrested her. At the end of October 1999, upon her return home, local police took my mother directly into custody at what was formerly the Yonghong District Police Department. The District officials forced my mother to choose between her job and Falun Gong. My mother solidly chose Falun Dafa, and was detained in Jiamusi City Detention Center on that same night. Meanwhile, former CCP Jiamusi City Committee secretary, Sun Qiwen, personally ordered my mother's dismissal from her government employee position.

By the end of October 1999, Jiamusi City Detention Center was over filled, police took some Falun Gong practitioners to Huachuan and Tangyuan Counties' detention centers. The condition was very bad. They were eating corn buns every meal, with salt water boiled frozen cabbage leaves. Very little of such "soup," was given. With cold wooden boards to sleep on, thirty practitioners were locked in a room less than 200 feet square during peak arrests. Some had to sit on the floor over night, since there was no space to lie down. In order to protest their illegal detention, practitioners went on hunger strikes many times, and they were tortured with brutal force-feeding of highly concentrated salt water plus corn meal. After 11 months of such inhuman mistreatment, my mother, who went in with a healthy body, came back home emaciated. She had to sell vegetables to make a living.

Every "sensitive day," police would conduct large-scale arrests. In concert with local police, workplaces and community administrations threatened job-loss if practitioners did not report every day. They also threatened practitioners' families. In the spring of 2001, with several fellow practitioners, mother went to Sifeng Mountain to share cultivation experiences. Police arrested them, and detained my mother more than 100 days. From then on, they harassed her more often, notwithstanding our varied living quarters after my parents sold our house to pay debts.

In May 2002, my mother was home to assist my preparation of high school entrance exams. Several officers from Xinli Police Station stormed into our place, ransacked our home, and detained my mother three months. I learned later that a city-wide dragnet was in force, wherein more than 200 practitioners were arrested this same night.

During the 2003 "SARS" epidemic, my parents (both practitioners) moved to Huachuan County because I went to high school there. Police from Jiadong District Department drove over and ransacked our home. They arrested my parents, initially detaining them at Anqing Police Station. My mother was sentenced to one year of forced labor. My father was detained one month in Jiamusi City Detention Center, and released after being extorted for 7000 yuan. The year of forced labor damaged my mother's health the most, during which she suffered a spell of crying and laughing non-stop.

The first time in detention, mother was injected with unknown drugs that permanently damaged her nerves. During another detention, she was tortured with "Back cuff (1)," such that both of her hands were cuffed backward onto a low metal bed frame. It was extremely painful, and disabled my mother from raising one arm for a long period of time.

In 2006, I was admitted to a university. My mother's cousin provided an apartment for us, and my mother found a job teaching accounting. Although we were still under huge financial pressure, and my mother's health was still not good, at least the three of us were together. However, this happy arrangement did not last long.

At 4 p.m. on February 28, 2009, police intruded our temporary home again, ransacked our home, and arrested my father, detaining him in Jiamusi City Detention Center. Police found my mother's cousin, and threatened her not to provide us with living quarters any more. Unable to bear such pressure, my mother almost mentally collapsed. After one year of such misery, she passed away of sickness on April 25, 2010.

(1) The practitioner's hands are tied behind his back with one hand over the shoulder and the other hand against the lower back. The police then apply a great deal of force to pull the two hands toward one another and handcuff the two hands together. See illustration on http://www.clearwisdom.net/emh/articles/2001/11/24/16156.html 21, 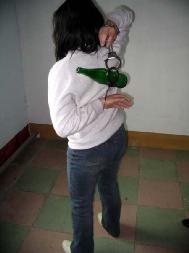