Taiwan: "This Persecution Should Never Have Happened" (Photos)

(Clearwisdom.net) Yueti (alias) got married in Taiwan ten years ago, and has since not been able to return to mainland China to visit her parents, simply because she is a Falun Gong practitioner. 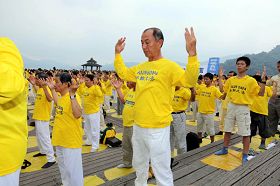 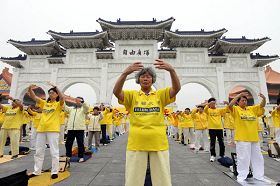 In July 1999, the Chinese Communist Party (CCP) initiated the full-scale persecution of Falun Gong. Yueti's father was afraid of being implicated, as he had experienced the CCP's brutal purges in the past. He got rid of the Falun Gong books in the house and wanted Yueti to give up practicing Falun Gong. Nonetheless he has noticed Yueti's positive changes in both mind and body during the past ten years. After thinking things over carefully, Yueti's parents saw through the CCP's false propaganda about Falun Gong and supported her practice.

Yueti and her husband both practice Falun Gong. They live frugally and save some of their money for printing informational materials about Falun Gong. Another portion of their savings is sent to Yueti's niece in China to help pay for her university education.

Yueti said that the facts about Falun Gong will soon be known all over the world. During the past ten years, many of her friends have supported her beliefs and stated that "this persecution should never have happened."

In March of this year, Yueti met a member of an art troupe from mainland China in Taichung. He told her that he saw an advertisement for Shen Yun Performing Arts in Taichung and really wanted to see it. He told her, "The CCP's persecution of Falun Gong was at Jiang Zemin's insistence. Though he is no longer in the top post, he still has power. But I believe that the Falun Gong issue will be handled differently in the near future. History will vindicate them. The majority of people in China oppose the persecution."