(Clearwisdom.net) After work, Falun Gong practitioner Hsu Bo-kun often tells people the facts about Falun Gong in front of Taiwan 101 Tower. At 7 p.m. on December 4, 2009, a police officer from Hsiyi Police Division issued him a fine notice of 300 Taiwan dollars. Mr. Hsu protested the fine in the Taipei court. In the opinion of the presiding judge, Lin Meng-huang, the fine interfered with the right of freedom of speech and ruled it invalid. In his ruling he condemned the Chinese Communist Party (CCP)'s information blockade and called on the Taiwanese Government to protect human rights. Taiwan Liberty Times reported the case on April 5 on its front page in a long article. 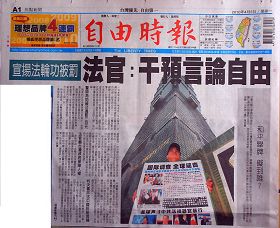 The report pointed out that Judge Lin was aware that Falun Gong was being persecuted in China and that that fact could be made clear through freedom of speech. But the Chinese Government controls many forms of media. Last month Google transferred its server in China to Hong Kong to avoid the CCP's rules of censorship. The CCP's information blockade keeps the Chinese people unaware of the facts about Falun Gong. Mr. Lin reminded the Taiwanese Government that administrative policy should serve the people. Mr. Hsu was expressing his views to Chinese tourists peacefully and did not obstruct traffic. His right should be protected by the constitution. If he was forbidden to hold a banner at scenic sites that Chinese tourists visit, how else could he spread the facts about Falun Gong to those Chinese tourists? Judge Lin waived the fine.

The article referred to Mr. Hsu's statement: "Falun Gong is banned in China and accurate information about it is unavailable. To inform the Chinese people of the true nature of the CCP's totalitarian regime, Falun Gong practitioners often hold banners in places that Chinese tourists visit and explain the facts of the persecution. Practitioners promote Truth-Compassion-Forbearance. No one is harassing those tourists."

Mr. Hsu said, "I held a banner peacefully and did not follow or abuse anyone. But I got a citation. Does that mean Taiwan behaves like the CCP to persecute Falun Gong?" So he filed a protest with the Taipei court and got a waiver.

The report stated that Lin Wen-kui, Deputy Director of the Police Division, said they respected the judge's ruling. He said that the citation was issued because someone reported traffic was being held up but for no other reason.

“Macau: Exposing the Persecution at the Qingming Festival (Photos)”

“Shen Yun in Taiwan: Art Association President: "Made me feel as though I had flown to a wonderland" (Photos)”