Macau: Exposing the Persecution at the Qingming Festival (Photos)

(Clearwisdom.net) Macau had a four-day holiday in 2010 because of Easter and the Qingming Festival. Falun Gong practitioners in Macau took the opportunity to expose the Chinese Communist Party's brutal persecution of Falun Gong to local residents and tourists. 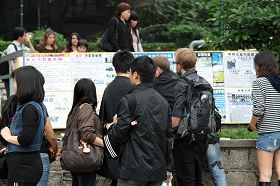 Display at the Ruins of St.Paul 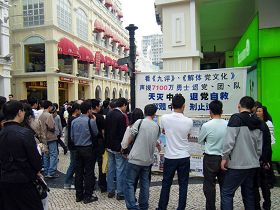 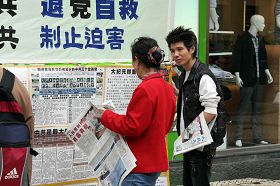 People find out about the persecution of Falun Gong.

The Ruins of St. Paul is a landmark and must-see tourist spot in Macau. Falun Gong practitioners exposed the persecution there every morning. Most of the Chinese tourists came in guided groups. Some of them were afraid of possible retaliation by the CCP when they returned to China, but more and more people have the courage to quit the CCP and affiliated organizations. Even some CCP officials took this opportunity to quit the CCP.

One day, a middle-aged man carefully read the display about 30 CCP officials being sued overseas for persecuting Falun Gong. A practitioner greeted the man and asked if he was a member of the CCP. He nodded. The practitioner said, "I can help you pick a pseudonym and quit the Party. I hope you will have a bright future!" He agreed, saying, "Great!" He added, "Do you know what I do? I work in National Security in the area of Falun Gong. Please leave now." The practitioner was happy the man had quit the CCP!

Located at the center of the city, Senate Square is also the center of business, finance, and politics in Macau. Every tourist visits Senate Square. It is often visited by huge crowds of people during holidays. Practitioners hold activities on Senate Square on Saturday, Sunday, and holiday afternoons. They spread the news of Falun Dafa, share their personal experience, expose the persecution of Falun Gong by the CCP, and help people quit the CCP.

“Practitioner Ms. Sun Li Illegally Arrested; Her Family Detained When Looking for Her”