(Clearwisdom.net) Shandong Province Women's Prison was built to hold 1200 inmates. This limit has been severely exceeded. The few buildings that have both prison cells and workshops house more than 2,000 women. Since there are not enough beds in the prison cells, inmates sleep on the floor. The prison management has openly acknowledged the situation. Deputy Warden Li Shuying told the media in 2005, "Take the example of the current situation of our prison (Shandong Province Women's Prison), we have collected female prisoners from the entire province since 1997. The number of inmates has been increasing by 10 percent every year. Now we are 100 percent over capacity, over-crowded and inconvenienced..."

Among this surplus are over 400 Falun Gong practitioners. Miss Liu Zhimei, who was #1 in academic achievement in Shandong Province, was given a waiver for the high school college entrance exam, and was then accepted by Tsinghua University, was dismissed by the university in March 2001 for practicing Falun Gong. She was arrested and sentenced to 12 years in prison in Beijing. Subsequently she was taken to the Shandong Province Women's Prison and tortured, which affected her mentally. Before being released in November 2008, she was injected with unknown drugs. On her third day at home, she suddenly suffered a mental collapse and has not yet recovered.

A brief description of the prison's setting:

A) After entering the gate, the prison hospital is to the left. B) The solitary confinement cell is at the north end of the first floor of the main building. C) Next to the solitary confinement cell is the primary examination room where everyone entering the prison has to go through so-called "education" and mental aberration testing. It has now become the place where they brutally attempt to "transform" practitioners. After "transformation," a practitioner is assigned to a division to do forced labor. This "examination room" is on the west side of the first floor of the building. D) Above it are the living areas for the Second, Third, and Seventh divisions. E) Next to the flagpole, outside of the building, is where the prison stages meetings and performances. (See the photo below) 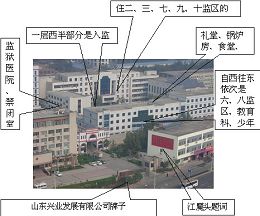 F) In front of the gate, on the east side of the courtyard is a small building facing west. The furnace room and cafeteria are on the first floor of that building; the auditorium is on the second floor. The basement was once the workshop of the Fourth labor division. The air there is foul with very poor natural light. Inmates were forced to work extensive hours or even throughout the whole night. One August, the inmates in this division were forced to stay in the basement to work for eight days straight. They were not allowed to sleep. If they were too tired, they were allowed to lay on the ground to sleep for half an hour and then to get up and continue their work. The inmates' clothes were soaked with sweat. Many people fainted due to exhaustion and heat, but the guards pretended not to see. After this deplorable situation was exposed, the prison polished its image. The Fourth Division's workshop was then moved to a different "slave" labor building facing the street.

G) The building on the south side of the courtyard contains the prison cells, the workshops for the Fifth, Sixth, and Eighth labor divisions, the Education Center, and the Juvenile Criminal Division. 1)The west side of the building is for the Sixth Division. The first and second floors are the central locations for the factory and the third and fourth floors are the living areas. The Sixth division houses all the elderly, weak, ill, and mentally-challenged inmates. The mentally sick were previously normal and generally become mentally disordered after being put into prison. They suffer greatly by facing an unbearable prison term, intensive forced labor, and isolation from the world. Even worse are the violent brainwashing tactics coupled with injections of drugs that damage the central nervous system. For these old and sick inmates, not only does the prison not release them, but it also forces them to do the same work as those from the other divisions. They are forced to work more than ten hours each day. And it's a regular thing for them to take work back to their cell to continue working throughout the night.

College student Liu Zhimei from Tsinghua University was imprisoned in the Sixth Division.

To the north of the gate are two relatively new forced labor buildings. One is next to the street, facing an area of new, high-end residential buildings. Because inmates were forced to stay late at night in the workshop, many people, including both residents and passersby, had concerns about the inhumane treatment of inmates. Due to media pressure, the prison came up with another trick. After the inmates work for over ten hours in the workshop, the guards then force them to take the remaining work back to their cells to finish at night. Sometimes, to pass unannounced checks, the inmates are required to leave the workshops right away. It is quite often that, in the rush, people fall down and break their hot water thermoses and injure others in the dark.

To intensify the persecution, the prison established an "Intensive Training Unit" in February of 2004. In the Training Unit, the guards yell at, beat, and insult practitioners at will. They often tell criminal inmates to monitor and beat practitioners. Whoever does as told receives a term reduction. Some criminal inmates participate in the persecution with misguided enthusiasm.

The prison's hospital has six staff members. Qin Shimei, in her 50s, is the president. The doctors frequently torture practitioners, performing barbaric force-feedings on practitioners who hold hunger strikes. Qin often sends several staff members to work together to torture practitioners: pulling their hair, plucking their nostrils, twisting their arms, stretching their legs, pinching and beating them, inserting feeding tubes through their noses, and so on. These practices cause practitioners enormous pain, including breathing difficulties, stomach aches, vomiting, tearing, runny or bloody noses, stomach bleeding, extreme exhaustion, etc. They also claim some practitioners are mentally ill and force them to ingest unknown substances for long durations.

This is what the Chinese Communist Party (CCP)'s Ministry of Justice claims is a "Ministerial modern civilized prison."

“Are Our Actions Really for the Sake of Others?”