(Clearwisdom.net) Falun Gong practitioners are tortured at Chongqing Women's Forced Labor Camp. They are also subjected to brainwashing and forced to do hard labor for the labor camp's financial gain. The labor camp uses the following three stages to persecute practitioners and to force them to do slave labor.

Falun Gong practitioners who refuse to be "transformed" are persecuted by being locked up in small confinement cells. In these small cells the practitioners are not allowed to sleep in beds, and have to sleep on the floor, or be brutally beaten. Sixty-nine-year-old practitioner Qiu Shengshu was once locked in a small cell.

The practitioners who refuse to be "transformed" are subjected to further persecution by the labor camp. 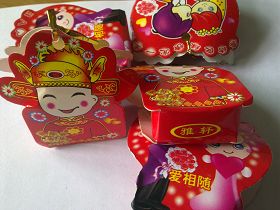 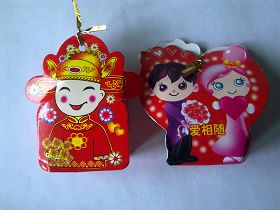 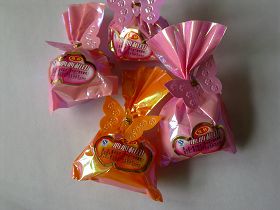 Various candies are wrapped at the labor camp. The candies above are popular for wedding celebrations.

The candy wrapping in the Fourth Division is kept hidden from the outside. The candy barrel and the board used for the candy wrapping are filthy and covered with mildew. Mouse excrement is often seen mixed in with the candies. When the higher authorities come to inspect, the camp guards hide all the candies behind the last two doors on the bottom floor in the shop for making the fittings for electric wiring installation. It was said that the National Labor Bureau was conducting a comprehensive inspection which lasted twenty days in August, 2009. The division took away all the candy barrels and candy wrappers on August 16. Hu Xiaoyan, Party secretary in the camp, personally threatened over 200 laborers, "If the authorities ask what kind of work you do in the factory, you are to say that you are making fittings and paper cartons. Don't say candy wrapping. Whoever says 'candy wrapping' will suffer the consequences of having your term extended."

The following are the types of candies wrapped in the labor camp and their names and manufacturer. Please let people know they should not buy products made by the Yaxuan Corporation.