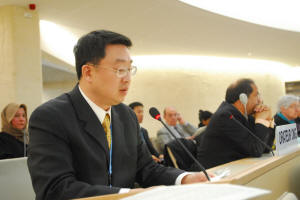 Mr. Chen said in an interview, "In the past eleven years, the CCP has employed all kinds of torture means to grossly abuse and mistreat Falun Gong practitioners, in an attempt to force them to renounce their beliefs. There has been a large number of cases documented in the reports by some Special Rapporteurs of the UN, which have been officially verified by the UN. The CCP regime's persecution of Falun Gong practitioners has persisted for eleven years. It has used the most sinister torture methods in the persecution of Falun Gong practitioners but it has failed to make these practitioners yield. Under such circumstances, the CCP resorted to administering drugs to damage the practitioners' central nervous system, so as to ruin their capacity to hold thoughts and consciousness. According to what we have learned, more than a hundred practitioners who were forced to take in these kinds of drugs have become disabled, injured and even died. These are only cases that have been recorded and were able to be passed outside of China through various channels. The actual situation is much more severe than what these cases reveal."

Mr. Zhang Jian who was shot in his leg on June 4, 1989, and one bullet still remains in his leg, observed Mr. Chen's speech at the UN conference hall. He said, "The Chinese Communist regime suppresses, arrests many prisoners of conscience, such as petitioners, human rights advocates, democracy activists, and Falun Gong practitioners, and forces them into mental hospitals. The CCP intends to destroy them physically, mentally defeat them and ruin their reputations. It turns people of conscience into patients with mental problems."

During the morning session on March 15, the CCP delegate attempted to stop Mr. Chen Shizhong's speech with an excuse that he is not a member of the UN Association, and at the same time, they urged the chairman of the conference, Mr. Alex Van Meeuwen, Belgian Ambassador to the UN, to have the Secretariat to check it out. The Secretariat reported to the chairman after verification that the UN Association is a non-governmental organization, and that Mr. Chen Shizhong is a member of the association's San Diego Chapter. After Mr. Meeuwen announced the result of the verification and invited Ms. Chen to make his speech, the CCP delegate further questioned the Secretariat's checking procedure and materials they looked into, claiming that Mr. Chen's speech did not fit with the subject of the conference, and complaining that the UN's examination and verification over the identity of the spokespersons for non-governmental organizations was not strict enough. He tried using other reasons in an attempt to stop Mr. Chen's speech, but Chairman Meeuwen rejected these inappropriate inquiries. The CCP delegate also instigated the Cuba UNCHR representative to support his unreasonable requests, and attempting to coerce the chairman. At this stalemate, the US delegate spoke and pointed out that the CCP delegate's attempt to stop Mr. Chen's speech was unreasonable and groundless, and was also wasting everybody's time.

The CCP delegate tried several times to stop Mr. Chen from giving his speech, and the US delegate also requested the Chairman twice to allow Mr. Chen to give his speech. Mr. Chen's speech was postponed for over an hour due to the CCP delegate's intervention, but it attracted the attention of delegates from many countries and human rights organizations. When Mr. Chen eventually made his speech, the entire conference hall was quiet, each and every word from his speech touched people's hearts. The Falun Gong issue was once again addressed on the world's stage, enabling governments and people of different countries to gain some understanding of the catastrophe that is taking place in China. Many people asked for the text of Mr. Chen's speech when it was over. 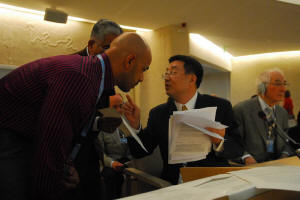 Mr. David Littman is a representative of the Association for World Education in the UN. He was discontented with the Chinese delegate's interference with Mr. Chen's speech. He said that all non-governmental organizations should enjoy the freedom to express themselves as long as they are examined and approved. They should not be questioned by any other delegate. Mr. Chen's speech was very important. He should be allowed to give his speech. The Chinese delegate and the UN should now handle this human rights violation issue.

The following is the text of Mr. Chen Shizhong's speech at the UN Human Rights Council Conference: [Original text]

Thank you Mr. President, United Nations Association - San Diego urges the Council to take action to end China's continuing violation of Falun Gong practitioners' freedom of belief. We are particularly concerned about the Chinese government's intensifying use of nerve-damaging chemicals to torture Falun Gong practitioners. A recent report submitted to our attention has documented over 1,000 cases of such harmful medication. Volumes and volumes of reports from the Council's own Special Rapporteurs have documented thousands of cases of severe torture and killing of Falun Gong practitioners by the Chinese authorities. Special Rapporteur Asma Jahangir stated in her annual report that:"The cruelty and brutality of these alleged acts of torture defy description." Failing to break the will of Falun Gong practitioners with physical torture, the Chinese authorities have escalated the use of nerve-damaging chemicals to destroy their capacity to hold thoughts and consciousness. This horrifying mind-killing medical torture has caused hundreds to become insane and has killed many. Due to China's blockade of information flow, the atrocities are feared to be more extensive. The report has also cited over two hundred hospitals that have taken part in the administration of harmful chemicals. In addition, medical professionals also advise and assist torture in detention centers and labor camps. This highlights the widespread of medical torture in China. Moreover, Special Rapporteurs Jahangir and Nowak have repeatedly requested China to explain the allegation of organ harvesting from Falun Gong practitioners. All this raises the question of roles of medical professionals in human rights violations. In conclusion, UNA-SD appeals to the international community to speak up against China's mind-killing medication. To remain silent to such killing of mind is a suicide of our collective conscience and humanity.