(Clearwisdom.net) On March 13, 2010, the Service Center for Quitting the Chinese Communist Party (CCP) in Toronto held an activity in Chinatown to support the 70 million Chinese who have already quit the CCP and its affiliations. Volunteers of the Service Center and Falun Gong practitioners put up banners and displays to expose the crimes the CCP has committed against Falun Gong practitioners in China. They called on the Chinese people to quit the CCP. 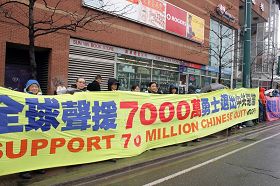 Rally in Toronto's Chinatown to support the 70 million who quit the CCP.

Ms. Li, who immigrated to Canada from Tianjin, lives in Chinatown. She agreed with what she read in the Nine Commentaries on the Communist Party because she still remembered the political movements she went through in China.

Ms. Li told a practitioner that she supported Falun Gong practitioners because she was moved by their actions. "You have been doing this for so many years. It is not easy to keep this going. I started to accept the fliers you give out. I read them and believed what they said was true. Now I want to read the new information on your fliers every time I come by," said Li.

Clement Rodrigo is in charge of the Southeastern Asia Community Alliance. At the rally, he said that the Chinese regime was afraid of groups with different opinions and thus suppressed them.

"For me, Falun Gong is a very peaceful group. However, the Chinese regime is scared of them, and tries to slander and even kill them," said Rodrigo.

"I know their values and what they practice is beneficial to society," said Rodrigo.

Su Ming, Vice Chair of the Canadian Federation for a Democratic China, said at the rally that quitting the CCP and its affiliations has become an unstoppable trend. "To dissolve the Communist regime is no longer just a wish. The regime is at its end," said Su.

"I honestly appreciate and admire the 70 million Chinese people who have the morality and justice in their heart to quit the CCP. What they did is the just action to save the country," Su concluded.