(Clearwisdom.net) On November 27, 2009, the presiding judge at the Shenhe District Court, in Shenyang City, Liaoning Province, held a hearing and illegally sentenced Falun Gong practitioner Ms. Tu Xiujuan to three years in prison. At present, Ms. Tu is being held at a detention center in Shenyang City. 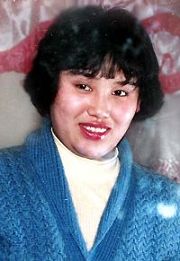 On September 9, 2009, police officers from Shenhe Domestic Security Division arrested Ms. Tu, 39, at her own business office. They also ransacked her home when no one was there, and confiscated personal items such as a computer, a printer, and Falun Gong books.

On November 27, 2009, the authorities from the Shenhe District Court and Procuratorate conspired with the Shenhe Domestic Security Division and 610 Office to hold a hearing on Ms. Tu's case. The court prevented Ms. Tu's family from hiring a lawyer from another town, stating that there was not enough time. Without any warning or prior notice, they suddenly moved the hearing from 9 a.m. to 1 p.m., and promptly concluded the hearing shortly after 2 p.m.

Only two family members were allowed to attend the hearing, who noticed that Ms. Tu was very thin. The prosecutors fabricated false evidence against Ms. Tu, and the so-called "witness" never showed up. Ms. Tu denied of any wrongdoing, but the judge, Li Hong, purposely ignored her and sentenced her to three years in prison.

Ms. Tu established a business and became self-employed after leaving Shenyang Ceramic Factory. She began to practice Falun Gong in 2003, and followed the principles of Truthfulness-Compassion-Forbearance to conduct herself in everyday life. She puts everyone before herself and people know that she is a good person.

Li Hong is the presiding judge over Ms. Tu's case. Prior to that, Li also sentenced Wang Chaodong to four years in prison. Li Hong did not even notify Wang Chaodong's relatives, claiming that they could not be found.