(Clearwisdom.net) On February 20, 2010, the Sydney Divine Land Marching Band, whose members are all Falun Gong practitioners, was again invited to perform at the Chinese New Year celebration in the Vietnamese Community by the Fairfield City Council. 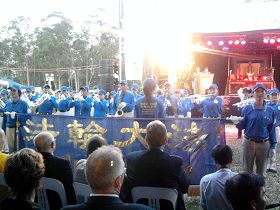 The celebration was held in the Fairfield City stadium. Over a dozen city council members and many VIPs attended. The band members, dressed in costumes reminiscent of ancient China, performed "Falun Dafa Is Good" in front of the main stage. Many people came by to take photos and give them warm applause.

The organizers introduced the Divine Land Marching Band and Falun Gong in both English and Vietnamese.

After learning the truth about the persecution of Falun Gong in China, the Vietnamese Community is very supportive of Falun Gong. They invited the band to their celebration for the second year in a row and also assigned them a location beside the main stage to promote the Shen Yun show for free. This is regarded as the best locatio,n and it usually costs more than $1,000 to rent the space.

Paul is the music director of the band. He said that the band has performed "Falun Dafa Is Good" in many events in the area, and many people are very familiar with it and deeply attracted to it. "To my surprise, sometimes when people meet me, they might not know what to say but then they hum the melody 'Falun Dafa Is Good' to me. At first, I was stunned, and then I understood that many people have been moved by the melody and they remember it. I believe it shows the residents are supportive to us and recognize us."