(Clearwisdom.net) Istanbul, Turkey was appointed by the European Union as one of the 2010 European Capitals of Culture. On February 19, 2010, the Truthfulness-Compassion-Forbearance International Art Exhibition arrived in the city. This art show has toured the world, visiting over forty countries on five continents, and has received high remarks from the visitors of Istanbul. 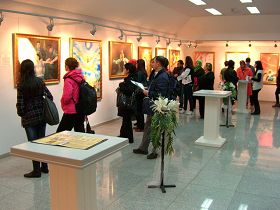 The first three days of the show were on a weekend, and many visitors, including many families, viewed the exhibition. Many visitors spent a long time at the gallery and some returned to the show bringing in their friends and families. Some visitors were moved to tears by the artworks.

Many people left written comments after the show. Some said the artworks left them with deep memories. People praised Falun Dafa and also condemned the atrocities committed by the Chinese Communist Party. Many visitors expressed their support and sympathy toward Falun Gong, hoping that the persecution would end immediately.

A total of thirty-one paintings were on display, showing the beauty of Truthfulness-Compassion-Forbearance and depicting the brutal persecution of Falun Gong in China.

The exhibition will end on February 24, then move to other areas of Istanbul.