(Clearwisdom.net) In Macao, over the Chinese New Year holidays (February 13 to 21), local practitioners dedicated themselves to clarifying the truth to visiting Chinese tourists at busy tourist attractions and in the bustling downtown district. Their goal was to encourage Chinese tourists to renounce the Chinese Communist Party (CCP) and its affiliated organizations. 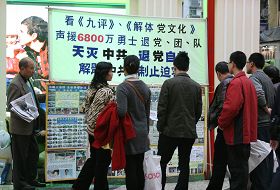 Tens of thousands of Chinese tourists walked past the displays and banners reading "Read Nine Commentaries on the Communist Party, and Dissolving the Party Culture; Heaven eliminates the CCP, Quitting the CCP for one's own sake." For many tourists, this was their first exposure to such information, as they are unable to learn such things easily in communist China. Many people stopped to learn more and took copies of the Nine Commentaries. Those who understood the grand tide of quitting the CCP renounced their membership in the Party, the Youth League, the Young Pioneers and other affiliated organizations.

A young woman took a copy of the Nine Commentaries and told a practitioner that she was a disillusioned Party member. She was considering quitting the Party. She eventually did so and happily carried on with her holiday.

“Paris: Over One Hundred Chinese Tourists Quit the CCP on the Weekend of Chinese New Year (Photo)”