(Clearwisdom.net) Practitioners in Singapore were invited by an open-air food center owner on the evening of February 21, 2010 to celebrate Chinese New Year with neighborhood residents. The practitioners then presented an artistic performance and spread the messages of Truthfulness-Compassion-Forbearance to local people. 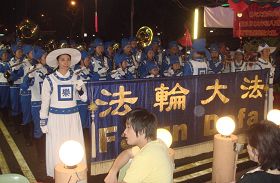 The Waist Drum Team was the first to perform. The audience was impressed by their bright yellow costumes and joyous and energetic drumbeats, and gave them applause. Ms. Lin was in the audience, and said this was the first time she saw the waist drum performance played in traditional Chinese style in Singapore. She found the performance terrific.

Mr. Yang commented, "The music and drumbeats were beautiful, I enjoyed it, and I appreciate their effort. I'll come to see if there is such a performance in the future."

The Divine Land Marching Band presented the last program. The resounding song, "Falun Dafa is Good" brought the warm atmosphere to its highest peak. The band members were dressed in traditional Chinese costumes, solemn and elegant. They performed several more numbers, and their wonderful performance received warm applause from the audience.

Local resident Ms. Lu and her husband Mr. Chen saw the band's performance for the first time in Singapore. They were excited. Ms. Lu said that every song was beautiful, and she loved it. She found it an enjoyable experience.

Ms. Liu, 70, said that the band's music was pleasant, and added to the festival atmosphere of the New Year celebration.