(Clearwisdom.net) In Munich, Germany, Falun Gong practitioners protested peacefully in front of the Chinese Consulate on January 24. Shen Yun Performing Arts was scheduled to give seven shows in Hong Kong, but three days before their departure, the Hong Kong immigration department informed the hosting organization that they decided to refuse to issue visas to six essential production staff members. The decision forced Shen Yun to cancel its performances in Hong Kong. The head of the Munich branch of an international human rights organization, Mr. Jürgen Thierack, gave a speech at the event. 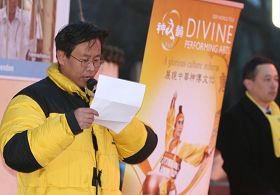 In an open letter, Falun Gong practitioners stated that during the past three years, Shen Yun Performing Arts has held more than 600 shows around the world, and more than one million audience members have watched the shows.

The letter also pointed out how Li Haiyan, the former Chinese Consul General in Frankfurt, interfered with Shen Yun shows in Munich in 2008. He defamed Shen Yun and exerted pressure on hosting organization to cancel the shows. The company was threatened to be deprived of the chance to do business with any Chinese companies. The general manager of the hosting organization described it as a shameful act. After the incident was exposed by German media, Shen Yun ticket sales soared.

Mr. Jürgen Thierack said at the event, "I am here today in front of the Chinese consulate to express my support to Falun Gong. This is not the first time that the CCP has imposed pressure to prevent Shen Yun shows. In particular, Hong Kong is in a special status as the Chinese government's commitment to 'one country, two systems'. In fact, the CCP is limiting the freedom of Hong Kong. We must help the public know the truth."

Many passers-by signed their names to condemn the CCP's persecution of Falun Gong practitioners in China. A woman who lives nearby said to a Falun Gong practitioner, "I have seen you before. You have done very well." Many people asked what they could do, and a number of Chinese passersby paused to take photos and accept informational materials.

“Dafa Taught Me To Look Inward”