(Clearwisdom.net) Sixty-two years ago, the United Nations adopted the Universal Declaration of Human Rights because people did not want a repeat of the tragedy of World War II. The Declaration says, “Whereas disregard and contempt for human rights have resulted in barbarous acts which have outraged the conscience of mankind, and the advent of a world in which human beings shall enjoy freedom of speech and belief and freedom from fear and want has been proclaimed as the highest aspiration of the common people. ”

In spite of heavy snowfalls in Germany over the past few days, constant streams of people in the streets of Dortmund, many of them tourists from neighboring cities and other countries, came to view the huge, 45-meter-high Christmas tree in keen expectation of the arrival of Christmas.

On December 10, practitioners set up their information stand with a sign in German saying “December 10 is World Human Rights Day” so that it could be seen by those who passed by on the busy street in the center of the city. Behind the stand was a banner in German that said, “36 Death Camps in China.” Beside the banner was an exhibition board clarifying the truth about Falun Gong and describing the five Falun Gong exercises in the German language. Practitioners demonstrated the exercises to the pleasing music.

Very often in front of the display there were big crowds of Germans who were against the persecution and in support of human rights. People waited in line to sign their names on the petition calling for an end to the CCP’s harvesting of organs from living Falun Gong practitioners. 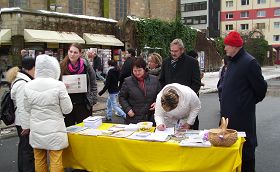 Learning about the brutal persecution of Falun Gong in China 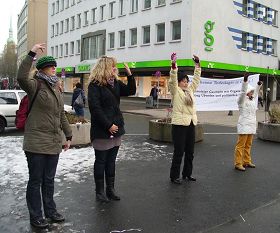 A young German: I want to write to Der Spiegel Weekly

Just after the information stand table had been set up, a young German came up and asked, “I am a loyal reader of Der Spiegel Weekly (one of the famous weekly magazines in Germany). Why has there not been any news about the persecution of Falun Gong in the Weekly? There have been too few articles about Chinese human rights in it.” It turned out that this young man had learned a great deal about Falun Gong in the nearby cities of Essen and Cologne. He took some leaflets about Falun Gong and left for the city center on his own business. Not long after, he returned and told the Falun Gong practitioners, “I will write to the Der Spiegel Weekly. I have made up my mind that I will write about the organ harvesting from the living Falun Gong practitioners. I will surely write about this.” Before leaving, he took some more materials about the organ harvesting for further study.

There was a Chinese woman who had married in Germany. She had not been able to get access to the facts about the persecution of Falun Gong while she was in China and did not know about Falun Gong, either. But she did not believe that practitioners had been tortured because she had been deeply influenced by the CCP’s media campaign vilifying Falun Gong. Practitioner Miss Liu Wei, who had personally suffered persecution, said to her, “The Falun Gong practitioners next to me and I myself have all personally witnessed the persecution. Just because I practice Falun Gong, even though I did not do anything illegal, I was sentenced to 16 months of forced labor without ever being brought to trial. I was detained in the Beijing Women's Forced Labor Camp, where I was not allowed to sleep or use the toilet and I was forced to sit up straight on a small stool for hours and hours at a time. The Chinese man over there, who also a Falun Gong practitioner, was detained in three forced labor camps, where he was handcuffed to the wall in a small cell.” Pointing to the steamed cornbread in the bowl displayed on the table in front of the information stand, Miss Liu continued, “Every day the only food he was given was steamed cornbread like that, only two pieces a day, hard, not fully cooked, and very dirty.” Hearing these true stories, the Chinese lady was very surprised. She became interested in learning more about Falun Gong. She took the leaflets in Chinese. She also took the leaflets in German, saying she would give them to her German husband to read so that he could learn more about Falun Gong.

A photographer: I will never buy anything made in China

Mr. Schmitz is a photographer. He started to take photos when he saw the displayed steamed cornbread, the food practitioners were given to eat in the forced labor camps in China. He also signed the petition. He told practitioners that he and his wife knew that many products from China were produced in labor camps and they no longer bought anything made in China. 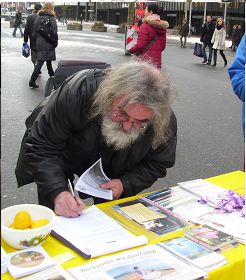 A 73-year-old German told practitioners that he knew that the Chinese products had no quality assurance and were made with cheap labor and by forced labor camps. He said he knew very well that authoritarian countries always use force to control and mistreat people and that he certainly believed the truth about the live organ harvesting.

A girl from the Netherlands had also seen practitioners in the Netherlands calling for the improvement of human rights in China. She asked many questions about the live organ harvesting and took many leaflets about the persecution of Falun Gong in China.

A German boy at first showed indifference to the persecution in China because, in his opinion, China was so far away. The practitioners told him that dripping water will wear away rock and that it would be a tremendous support to the Chinese people if more Germans were on the side of justice. The boy talked with the practitioners for a long time and finally signed the petition.

Another young man asked the Falun Gong practitioners why they were standing there. A practitioner told him, “There are so many innocent Chinese people who have been persecuted to death in China. I cannot stay at home on this World Human Rights Day. I want more people to be aware of what is happening in China.”

Light a candle to mourn the death of fellow practitioners

As it got dark and began to drizzle, the practitioners lit candles to mourn their fellow practitioners who had been persecuted to death in China. The candlelight got the attention of two young men, who asked what had happened. The practitioners told them, “We are here today to tell people about the CCP persecution of Falun Gong in China. Just look at the photos the practitioner over there is holding. They were all his friends who have been persecuted to death.” The two young men asked, “What can we do to help?” They signed the petition calling for an end to the persecution. Three other young men did the same. They asked the same questions and, without hesitation, signed the petition. 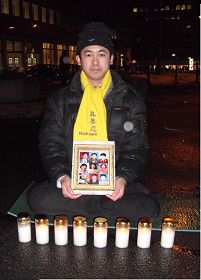 Practitioner Mr. Guo Jufeng at the candlelight vigil mourns nine of his fellow practitioners who have died as a result of the CCP persecution.

Practitioner Mr. Guo Jufeng comes from Dalian City, Liaoning Province, China. Nine Falun Gong practitioners whom he knew very well were persecuted to death. Seven were from Dalian City, and they left five small children behind. In the past, Ms. Wang Qiuxia, Mr. Wang Zhehao, and Mr. Guo had practiced Falun Gong together in Zhongshan Park in the Shahekou District of Dalian City. More than 300 people did the Falun Gong exercises there before the persecution began in 1999. After the persecution began, Ms. Wang Qiuxia was tortured to death in Dalian Forced Labor Camp because she did not give up her belief in Truthfulness-Compassion-Forbearance. Mr. Wang Zhehao, only 27 years old, was severely beaten, his face bloodied, in the Labor Camp of Huludao City. He died after he was sent to and detained in three different labor camps. Mr. Cao Yuqiang and Mr. Guo were sent to and detained in three different labor camps in Liaoning Province. They were set free finally because they went on a hunger strike. Later, after Mr. Cao Yuqiang was arrested again, his weight dropped to about 40 kilograms and he died.

Mr. Guo said, "During our illegal detention in Dalian Forced Labor Camp, we 10 Falun Gong practitioners were taken into an 'education building,' where the detained were all male practitioners. When we first arrived, we were brutally tortured for no reason. Only the most ruthless of the ordinary prisoners were recruited to join in the persecution in this place. We ten practitioners had to kneel on the ground with our hands raised horizontally without the slightest movement. If we moved, we were shocked with electric batons. After torturing a post-graduate with electric batons, they hung him up and poured liquid pepper into his nose. The police pulled the clothes off the back of a practitioner next to me, poured water onto his back, and placed an electric baton of over ten thousand volts on his back. The electric current followed the water over his whole body. I was tortured with an electric batons for five hours. My neck was seriously burned. The police placed a mirror in front of me and forced me to look at my unkempt self in the mirror. Then they laughed. The guards not only abused us physically but also used every means possible to make us suffer mentally. During my detention in the Dalian Labor Camp, I was forced to do hard labor. I had to process two boxes of diodes (130 kilograms) for at least 16 hours a day except for when I ate and slept.”

Mr. Guo continued, “I was very unfortunate but also fortunate. I can now freely express my views and I can also tell the foreigners from over 13 nations in my language class about the beauty of Falun Gong and the facts of the CCP’s persecution of Falun Gong. Humankind has moral standards. Humans have the right to be good but no right to do evil things. I am a victim, a witness, and a survivor of the persecution of Falun Gong. For some people, freedom and human rights may be within reach. But in a country with no guarantee of human rights, people’s lives are very hard and they suffer inhuman treatment which makes people bristle with anger. It is World Human Rights Day today. I believe that I am not alone in hoping that human rights are respected. I also believe that when more and more people say “No” to the brutal torture and persecution, human dignity will be restored and the tragedy will not be repeated.”

On World Human Rights Day, the tourists, including many children from Germany, the Netherlands, and the English speaking countries, as well as Africans and Turks, had the opportunity to learn about Falun Gong. Many of them were delighted to take with them the paper lotus flowers full of blessings, hand-made by the Falun Gong practitioners. Many people asked for information about doing the Falun Gong exercises. During the Christmas season, people have learned a lot about Falun Gong.