(Clearwisdom.net) On December 10, 2010, International Human Rights Day, Falun Gong practitioners in Austria held an Information Day activity at the city centre of Altenmarkt, Salzburg. The event brought awareness to the locals and tourists from around the world about the CCP’s brutal persecution of Falun Gong practitioners and called for an end to the CCP’s atrocities. 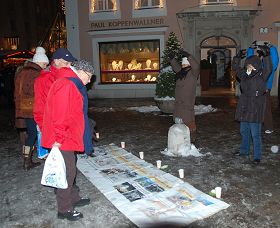 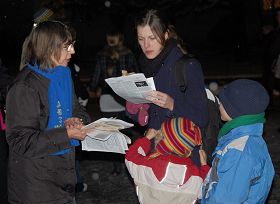 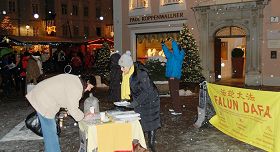 Though it was a snowy in December, Salzburg, a widely known Slazburg Christmas Market attracted a great number of local people and tourists from various parts of the world.

Seeing the display boards about Falun Gong and the Falun Gong exercise demonstrations by the practitioners, visitors came up one after another to learn more. Many of them, upon learning about the CCP’s persecution of Falun Gong, signed the petition calling for an end to the persecution and expressed their support.

Another woman said to a Falun Gong practitioner at the display area, “Your activity against the persecution is very important!”

“Deterring the Authorities' Persecution with Unified Righteous Thoughts and Actions”

“Ms. Liu Meili from Wuhan City Illegally Arrested and Robbed by the Police”