(Clearwisdom.net) At 4 p.m. on October 30, 2010, the Eighth Falun Dafa Cultivation Experience Sharing Conference was held in a hotel in Lima, Peru. 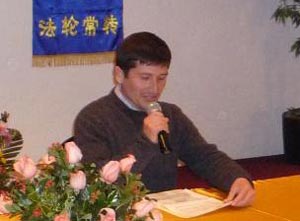 Enrico was born in Beijing and moved to Peru when he was six years old. He is an undergraduate student majoring in music. He has practiced Falun Gong for eight months. He said he was looking for a system to elevate himself when one of his friends introduced him to Falun Gong. After reading Lunyu in Zhuan Falun, he felt he had finally found the practice he sought. There was much interference initially. After reading the Nine Commentaries on the Communist Party, he understood the evilness of the CCP culture. He reads Dafa books and sends righteous thoughts regularly. He asked his mother to teach him the Chinese language. Now he can read Zhuan Falun in Chinese and has viewed the videotape of Master Li's nine lectures in Guangzhou.

Herma shared her experience of seeing a group of people doing exercises in a park in Caracas, the capital of Venezuela, five years ago. She was impressed by how peaceful and calm they were, and she learned the practice from them. She felt the marvelous effects of the practice. Three years ago, she told her 93-year-old father about Falun Gong and asked him to recite "Falun Dafa is good." Now her 96-year-old father lives a healthy life. She sincerely appreciated Master Li.

She hopes that that world will learn the facts about the CCP's persecution of Falun Gong. She frequently distributes flyers. She and other practitioners in Peru went to New York to attend a Falun Dafa Cultivation Experience Sharing Conference. They were excited to see great, compassionate Master. They saw a Shen Yun Performing Arts show and were touched by the expressions of five millennia of traditional Chinese culture. They wished that Shen Yun could come to Peru.

The practitioners' speeches were warmly applauded. At 8 p.m., the conference concluded with the song "Falun Dafa Is Good."

“Poland: Practitioners Condemn Jia Qinglin for His Crimes in the Persecution of Falun Gong (Photos)”