(Clearwisdom.net) On October 24, 2010, Falun Gong practitioners participated in the 39th Amagasaki Shimin Matsuri (Amagasaki People's Festival), which is held annually by the Amagasaki city government to celebrate the city's birthday. The practitioners demonstrated the exercises of Falun Dafa and told passersby about the persecution in China. 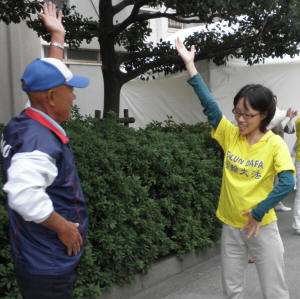 Amagasaki is located between Osaka, the second largest city in Japan, and Kobe, the city by the sea. Every year the festival draws thousands of people and is one of the most important activities for the local residents in the fall.

At noon the practitioners demonstrated the five exercises. Meanwhile, a local practitioner introduced to the audience in Japanese how the practice helps with physical and mental fitness, how it promotes morality and how it is practiced by people around the world. Some audience members and the host followed the practitioners' movements and learned the exercises.

At the Falun Dafa table, many were interested in the paper lotus flowers made by the practitioners. Some passersby asked for them and some wanted to learn how to fold them. While satisfying the requests from the passersby, practitioners handed them Falun Dafa fliers, told them about the beauty of Falun Dafa, and pointed out the website printed on the bookmarks under the paper flowers.