CCP Crimes Behind Plastic Flowers and Umbrellas Made in China (Photos)

(Clearwisdom.net) On the evening of October 2, 2010, Scotiabank Nuit Blanche, a free all-night celebration of contemporary art, was held in Toronto. It started from sunset at 6:57 pm and ended at sunrise the next day. Falun Gong practitioners participated in this event and displayed more than 70 products that are relevant to the Chinese Communist Party (CCP) persecution of Falun Gong. Among the common products seen in shops in North America, umbrellas and plastic flowers made in China were shown at the event to expose the CCP's crimes. 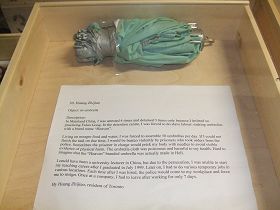 Falun Gong practitioner Huang Zhijiao from China exhibits an Umbrella of Heaven brand that was made in forced labor camps. Following is her narration:

Today, I can stand here to express freely my thoughts. But this time last year, I was in China without freedom of speech. In China, I was arrested four times and imprisoned three times for practicing Falun Gong. I was imprisoned in Laodongyue Detention Center, Hangzhou, Zhejiang Province for the last two times. I was forced to do slave labor and suffered from torture from prison guards and inmates who were instigated by guards.

After I was arrested the last time, I protested by hunger strike. Prison guards handcuffed my hands from behind. The handcuffs cut into my wrists and caused my hands and arms to be swollen for several days. They also cuffed me in hallway by tying me in a position facing a wall, kneeling on the ground, with my arms pulled upward forcefully and cuffed, and legs tied together. I was tied in this painful position for half a day. I felt faint and could not walk afterwards. I was dragged into a cell after the torture.

I was forced to be a slave laborer to make umbrellas in the detention center. The umbrella can withstand UV rays and the materials used contain toxic chemicals. When we made the umbrellas, our hands were not protected, and hurt due to long time exposure. The skin on my palms became so thin due to the work and felt painful when touched. I felt extremely itchy when touching the toxic cloth used for the umbrellas.

In China, prisons and detention centers use free labor to make profit; companies reduce costs by contracting products to detention centers; prison guards are rewarded with bonuses; and inmate heads are rewarded with reduction of their detention terms. These people work together to exploit inmates in prisons and detention centers. Generally I made more than 50 umbrellas a day if I worked for 15 hours per day without a break. On average, I had to make an umbrella in 18 minutes. When I was detained the first time, the prison guards removed my eyeglasses intentionally, though they knew I was nearsighted. I was forced to do clothing work using needles. I could not see clearly enough to meet quality requirements. The head inmate often beat me with anything at hand, such as needles, scissors and so on.

In China, under the CCP's policy of "eliminating their bodies" and "beating them to death is counted as suicide", Falun Gong practitioners suffer inhumane torture. Many have died in the CCP's live organ harvesting. Here, I demand the CCP to stop persecuting Falun Gong and immediately release all Falun Gong practitioners being imprisoned. I call all kind-hearted people to work together to stop this unprecedented persecution.

Plastic flowers made in China 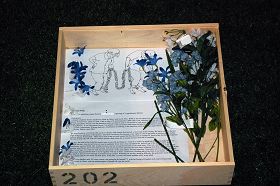 Plastic flowers made in China

In the detention center, we were forced to work from 6 a.m. till 11 p.m. every day. We had no freedom, but sat on the wet cement floor to work on piles of plastic flower materials. The weak light on ceiling was on for 24 hours a day. We continuously rubbed leaves, stems, and petals and quickly assembled flowers.

One day, the detention center head with a surname Zhu came over and cursed us. When we pointed out that what he said was not factual, he kicked the throat of a practitioner beside me. She could not speak right away. I said loudly, "Don't beat her." He said, "You speak out. I'll let you experience punishment." He ordered a few male prison helpers to bring a set of fetters of more than ten pounds and locked my foot and another practitioner's foot together. We had to move together to walk. The next day, a prison guard interrogated me. The other practitioner had to go with me. We spent twenty minutes to walk the hallway of only more than ten meters (about thirty feet). Seeing us moving with difficulty, the prison guard had a mocking sneer on his face. Eleven years have passed, but this scene is still vivid in my memory.

I hope all Falun Gong practitioners in China are released as early as possible, an that kind-hearted people around the world will help stop the persecution.

“Teacher Zhu, Everyone is Looking Forward to Your Return Home”