(Clearwisdom.net) On the afternoon of October 2, a rally was held in Chinatown in Vancouver to support the 81 million Chinese people who have withdrawn from the Chinese Communist Party (CCP) and its affiliated organizations. Vancouver Falun Gong practitioners' Divine Land Marching Band performed at the rally. 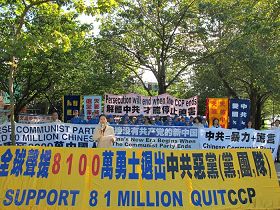 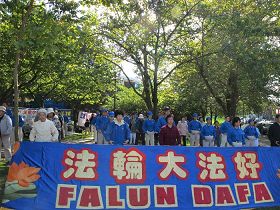 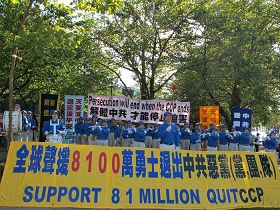 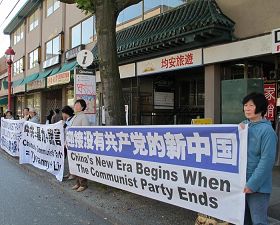 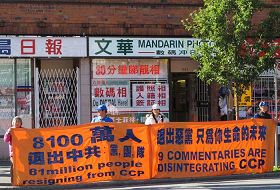 At the rally, representatives from the Vancouver Quit the CCP Service Center, Epoch Times Vancouver, the Vancouver Association to Promote Quitting the CCP, and the Chinatown Quit the CCP Group gave speeches. They congratulated the 81 million people who have bravely quit the CCP and its affiliated organizations, and urged more people to see the evil nature of the Party and thus make the right decision for themselves.

Ms. An immigrated to Canada from Shanghai five years ago. At the rally, she said: "I know the CCP very well and I personally witnessed its crimes. In fact, all Chinese people know how bad the Party is. However, many people have been terrified and traumatized by its brutality. They do not dare to speak out. When I was in China, I said that the CCP was so evil and we could only wait for its destruction. The Nine Commentaries on the Communist Party did a terrific job analyzing the Party."

Ms. An also expressed her admiration to Falun Gong practitioners as they dare to expose the crimes committed by the CCP despite the brutal persecution. "Practitioners in China have suffered so much; however, they persist. It is amazing."

After the rally, participants displayed banners at busy intersections in Chinatown to let more people know about the over 81 million people who have quit the CCP.

Some Chinese people had reservations about the total number of people who have quit the CCP. At a bus stop, a senior citizen said: "Can there be so many people?"

Another two seniors commented that they had visited the website for quitting the CCP and knew this number was real. "This number also includes people who have quit the Young Pioneers and the Youth League."

In the end, the senior who initially had doubts said that he understood.