(Clearwisdom.net) At 8:30 a.m. on September 29, 2010, the Huangdao District Court in Qingdao City, Shandong Province, staged a public trial of Mr. Wang Zhansuo, a Falun Gong practitioner. In preparing for this trial, the Political and Judiciary Committee of the Huangdao District coordinated with the district's police department, Procuratorate, Court, and Justice Department to keep up the appearance of legality and conceal their underhanded dealings. Despite all the special arrangements, the trial was revealed as an outright deception.

Mr. Wang Zhansuo was the vice president of the Intermediate Court in the No. 7 Agriculture Division of the Xinjiang Production and Construction Corps. He is a licensed attorney at the Hengxin Law Firm in the Qingdao Economic Development District, Shandong Province. He was known for upholding justice in handling legal cases and his refusal to take bribes

Mr. Wang was arrested on the evening March 4, 2010, for practicing Falun Gong. Arrested with him were his wife and son at their home in the Huangdao District. His wife has since been released after having developed symptoms of high blood pressure while being detained. She lives at home and is under constant surveillance. Mr. Wang remains in custody at the Huangdao District Detention Center (also known as the Liuhuapo Detention Center).

The trial was held at 8:30 a.m. on September 29, 2010. No decision was reached. All the events that led to the trial, and what happened inside and outside the courtroom that morning, have shown that it was staged solely to spread lies to defame Falun Gong. 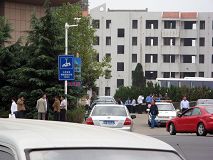 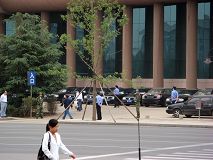 1. The Huangdao District Court claimed that this was to be a public trial. The law requires that three days prior to any public trial, the court has to publicly announce the defendant's name as well as the time, location, and reason for the trial. The Huangdao District Court not only failed to make the announcement, it even canceled all announcements of other trials during the entire week. The court's website has consistently published public announcements, but between September 20 and 30, 2010, all announcements were taken down from the website.

2. Mr. Wang's family learned from their own sources that the trial was scheduled to start at 9:30 a.m. on September 29. The court abruptly changed the start time to 8:30 a.m., as an extra hurdle for Mr. Wang's family.

3. Beginning at 7:30 a.m., the roads surrounding the Huangdao District Courthouse were all cordoned off. Hundreds of armed police, public security, and state security officers were stationed outside the building. Pedestrians were interrogated in the district government building north of the courthouse as well at the Customs House west of the courthouse. When people asked why the roads were all sealed off, they got the uniform lie that there was an internal event at the courthouse. No one was allowed to enter the courthouse for normal business.

4. Those who tried to enter the courthouse for other trials were told that there was only one trial that day, and that it was closed to them, which contradicts the requirement for a public trial. In fact, all work was stopped that day. Everything gave way to the staged trial of Mr. Wang.

5. The court prevented Mr. Wang's wife and son from attending the trial. Only his daughter-in-law and a her friend were granted admission. The two ladies went through three rounds of security checks. Even their underwear had to be taken off and searched.

6. Over 20 guest seats in the courtroom were all occupied by the plainclothes police and representatives of the Procuratorate and court. Mr. Wang's daughter-in-law and her friend were taken to designated seats, far apart from each other, and surrounded by plainclothes officers.

7. When Mr. Wang's family inquired about the court session prior to the trial, the court clerks withheld information. They said that Li Ming was to be the presiding judge. When the family tried to ask Chen Daping, the president of the criminal tribunal, the clerks lied that Chen was out of town on business. Yet, when the trial was held, Chen turned out to be the presiding judge, and Li Ming was a judge on the panel.

8. Prosecutor Wu Di was the deputy head of the Public Prosecuting Division of the Huangdao District Procuratorate. When preparing the case in the Procuratorate, Wu and Teng Zhaomeng, the head of the Public-Prosecuting Division, conspired with the Huangdao District Political and Judiciary Committee and 610 Office to threaten Mr. Wang that if he did not sign the fabricated confession statement, his son would be taken to a forced labor camp. During the trial, Wu fabricated evidence and testimony from witnesses, and smeared and attacked Falun Gong. He claimed that the telephone calls, emails, and text messages (clarifying the fact about Falun Gong) that the police department, court, and Procuratorate received were all sent under orders from Mr. Wang. Even the government-appointed defense attorney could not take these outright lies. He pointed out that Mr. Wang had been in custody. He had no personal freedom and could not be responsible for any of those messages.

9. The prosecutor presented no evidence, and no witness showed up. There was no proof of the authenticity or legality of the evidence and testimony.

10. Mr. Wang Zhansuo defended himself. He rebutted the fabricated testimony and other illegal activities of the police department, court, Procuratorate, and Justice Department. He insisted that he was innocent. He affirmed that he believed in Truthfulness-Benevolence-Forbearance. He demanded to be exonerated on all charges and released immediately.

12. The entire session was videotaped. At the end of the session, the police line outside the court was lifted while cameramen videotaped the plainclothes crowd walking out of the courtroom, making it seem as if it really had been a public trial.

13. The authorities did not pass up the opportunity to investigate and harass the young lady who accompanied Mr. Wang's daughter-in-law to the courtroom. They secretly photocopied her residential ID card during the security check and immediately sent out people to investigate her neighbors and find out whether she had any connections with Falun Gong.

The trial lasted around an hour. No decision was reached.

Individuals responsible for the sham trial: